The 2015 Oxford Dictionary Word of the Year is hard to define. It is even harder to pronounce.

That is because it is not even a word at all. It is an emoji. The winning emoji of 2015: a face crying "tears of joy".

Emojis are icons that share a feeling, mood or thought with an image. Usually it is an image of a facial expression. 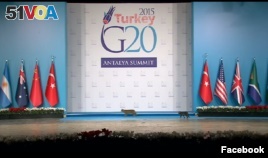 Oxford and the mobile technology business Swiftkey found that the "tears of joy" face was the most-used emoji globally in 2015. It announced the winning emoji on Tuesday.

Oxford Dictionaries chooses a word every year that represents the biggest trends in the English language. This is the first year ever that Oxford has selected an emoji as its Word of the Year.

Powerful world leaders took the stage yesterday at the G-20 summit in Antalya, Turkey. But the talk today was all about three cats who managed to wander onto the stage.

On Facebook the search term "Stray Cats" trended worldwide. A Canadian Broadcasting Corporation video received over 700,000 views. Turks commented on the video and on other social media posts that "stray cats" was not exactly correct.

Clara Yonca wrote, "for us - Turks- cats are like natural part of our community. We feed them, take care of them, give them names etc.. we love cats."

And another commenter on that video joked: "They're not strays. They're the leaders of Kittistan and Catlandia."

But it was not the results that people talked about on social media. It was what happened before the game even began.

The crowd of more than 70,000 people sang The Marseillaise - the French national anthem. England's Football Association had urged fans to learn the words to the song to show support for the victims of Friday's terrorist attacks in Paris.

wander - v. to move around or go to different places usually without having a particular purpose or direction

stray - adj. lost or having no home