Since the Paris terrorist attacks, a growing number of U.S. lawmakers want to close the door to Syrians.

They say they are concerned that terrorists may enter with the refugees.

Pat McCrory is the governor of North Carolina:

"I am now requesting that the president and the federal government cease sending refugees from Syria to North Carolina until we are thoroughly satisfied with the effectiveness of the federal background checks and security checks conducted on such refugees entering our country."

More than 20 Republican governors have said they do not want Syrian refugees in their states. 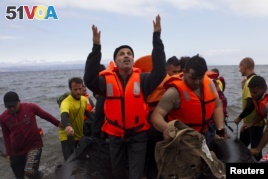 A Syrian refugee prays as he arrives on an overcrowded dinghy on the Greek island of Lesbos after crossing a part of the Aegean Sea from the Turkish coast, September 29, 2015. (REUTERS/Dimitris Michalakis)

And on Capitol Hill, some Republicans want to stop the arrival of Syrian refugees until Congress can vote on whether to admit them or not.

But Democrats say refugees to the U.S. get extensive background checks. The checks can last months, or even years. The U.S. Department of Homeland Security conducts the background checks before allowing refugees into the country.

Senator Ben Cardin is from Maryland:

"The vetting process involves many agencies, it takes a long period of time, and we do make sure that they (the refugees) have no affiliations with terrorist organizations, and certainly not involved with ISIL."

Republicans want to know how a refugee from a war zone like Syria can be properly vetted. Senator Bob Corker is from Tennessee. He asks: If there is no central database of information, how can states know the backgrounds of the individuals?

Congressman Eliot Engel is the top Democrat on the House Committee on Foreign Affairs. He says we have to be "very, very, very careful" about who we admit to this country. But, he adds, "slamming the door and having zero compassion whatsoever is not the way to go."

Speaking at the G-20 Summit in Turkey on Monday, President Barack Obama rejected the idea of blocking Syrian refugees from entering the U.S.

"We also have to remember that many of these refugees are the victims of terrorism themselves. That's what they're fleeing. Slamming the door in their faces would be a betrayal of our values."

Earlier this year the Obama administration increased the number of Syrian refugees coming to the U.S. from 2,000 to 10,000. These numbers are small compared to the 160,000 people, Syrians and others, settling in Europe. Millions are also already living in camps in Turkey, Jordan, and Lebanon.

Michael Bowman and Zlatica Hoke reported on this story for VOANews.com. Anne Ball adapted this story for Learning English. Kathleen Struck was the editor.

We want to hear from you. Write to us in the Comments section and 51VOA.COM.

vet(ting) – n. to verify or check for accuracy or validity

compassion – n. a feeling to wanting to help someone who is sick or in trouble