Update Required To play the media you will need to either update your browser to a recent version or update your Flash plugin.
By VOA
16 November, 2015


A study-abroad student from the U.S. was one of the 120 people killed in the Paris terror attacks.

Nohemi Gonzalez was 23 and a design student at California State University Long Beach. Gonzalez was at a Paris restaurant with fellow students when she was shot and killed, the university said.

She was studying in Paris as part of a semester abroad program. 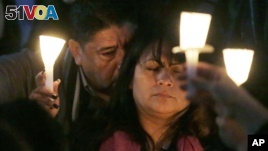 Hundreds gathered at Long Beach State Sunday to remember Gonzalez. A memorial and candlelight vigil honored Gonzalez, her work ethic and her kindness.

Memorials were held worldwide, from North America to Europe to the Middle East.

Flags over the American capitol in Washington, D.C. will fly at half-staff until Friday for those killed in Paris. Five thousand people held a silent march in Montreal, Canada.

Foreigners from at least 13 countries were killed in the attacks. Many were from Algeria, Morocco and Tunisia, all Muslim countries. Portugal, Chile, Mexico, Romania, Belgium, Great Britain, Germany, Italy, Spain and Sweden said each had citizens who were killed in Paris.

Molly McKitterick and Elizabeth Lee reported on this story for VOANews. Jim Dresbach adapted it for Learning English. Kathleen Struck was the editor.

semester – n. one of two periods, usually 18 weeks long, that make up an academic year at a school or college

What do you think of the world's reactions to the attacks? We want to hear from you. Write to us in the Comments Section or visit our 51VOA.COM.