Words and Their Stories: Great Scott

Update Required To play the media you will need to either update your browser to a recent version or update your Flash plugin.
By Marilyn Christiano
01 September, 2012

Every language has its ways of expressing strong emotions -- surprise, shock, anger.

The expressions range from mild to strong, from exclamations and oaths, to curses and swear words. The ones that are accepted in public speech change through the years as social rules change. 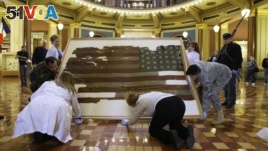 Some of the most popular expressions are those that are guaranteed not to offend anyone. Most of these exclamations have survived from earlier days. And their original meanings are long since forgotten.

Great Scott! is a good example. It expresses surprise or shock. You might say to someone, "Great Scott! I did not know she was married!"

Just before the Civil War, the Whig political party was making a last effort to remain a part of American political life. For the election of eighteen fifty-two, the Whigs wanted to offer a colorful candidate for president.

They thought that Winfield Scott would be the right candidate.

In his thirty years as a general, Winfield Scott had become one of the best-known military leaders in the country. During the war with Mexico, he had captured Vera Cruz and occupied Mexico City.

So, party leaders thought that if any Whig could be elected president, it was Winfield Scott.

His speeches were full of praise for himself. It was evident that he thought he was the greatest candidate who had ever lived. Soon his political opponents began to make fun of him. They called him, Great Scott.

General Scott did not come close to winning the presidency. But his name still lives as part of the English language.

Other popular exclamations combine holy with other words.

Holy Mackerel! is one that expresses surprise or wonder. It comes from earlier days when the Roman Catholic Church ruled that Catholics must not eat meat on Fridays. Since mackerel was a common and cheap fish in the United States, it was often eaten for dinner on Friday.

Then there is Holy Toledo! It is another expression of surprise. It refers to the city of Toledo, Spain, an important religious center in medieval times. Toledo was a holy city for both the Roman Catholics and the Muslim Moors of Spain.