Update Required To play the media you will need to either update your browser to a recent version or update your Flash plugin.
Katherine Gypson
April 06,2016


WASHINGTON— U.S. Secretary of Homeland Security Jeh Johnson called for cooperation from the American Muslim community Wednesday, during a speech at a symposium on Countering Violent Extremism.

The terrorist attack in Brussels last month has renewed debate over ways to counter violent extremism in the United States, with calls by some Republican presidential candidates calling for surveillance of American Muslim neighborhoods.

But Homeland Security head Jeh Johnson says that proposal does not reflect reality. 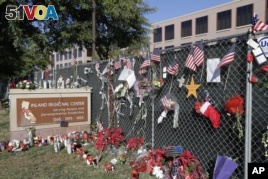 FILE - Flowers and American flags honoring the victims of the Dec. 2, 2015, terror attack at the Inland Regional Center are seen outside the complex in San Bernardino, California, Dec. 29, 2015.

"The overwhelming, overwhelming majority of American Muslims, including those who serve in our United States military, by the way, and in our government, are patriotic, dedicated people who love this country and who want to help us with public safety and secure our homeland because they know it’s their homeland too," he said.

“The Islamic State, which is the most visible, most prominent and probably the most dangerous terrorist organization that we face right now, is targeting American Muslims," he said. "We must respond in countering that effort as a matter of homeland security.

Johnson ended his speech with a call for cooperation and bridge-building, saying American Muslim communities should not be isolated or vilified.