Update Required To play the media you will need to either update your browser to a recent version or update your Flash plugin.
Joe DeCapua
June 25,2015

Writing in the AGI report, Liberian President Ellen Johnson Sirleaf said, “It’s critical for people of the Ebola-affected countries to have a stake in their own futures.” She added that governments should “steer the course,” but everyone must take a “turn to row.”

Dan Hymowitz is head of the British charity’s Insight and Learning program and co-author of State of Emergency: How Government Fought Ebola.

He said, “We worked in the three countries on the Ebola response. This is a report that’s been developed based on our experience, our work and what we saw. And what we saw is that while there’s a perception out there that international actors, international organizations are primarily responsible for getting Ebola under control, what we saw is that it was Guineans, Sierra Leoneans and Liberians who really stepped-up to manage this crisis.”

The report cited specific decisions made by the leaders of Sierra Leone, Liberia and Guinea. For example, Sierra Leone Leader Ernest Bai Karoma ordered the military to take the lead against Ebola because the Ministry of Health lacked resources. 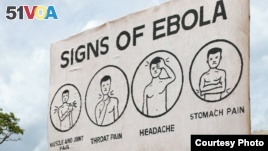 “I think that one was important just recognizing that this wasn’t purely a health challenge. A lot of the challenges of managing this crisis was getting the whole system to work. There were a lot of issues around logistics -- just getting all the parts working together,” said Hymowitz.

In Liberia, President Sirleaf went against culture and tradition by ordering the bodies of Ebola victims cremated and not buried. She acted on warnings from the US Centers for Disease Control and Prevention and the World Health Organization.

“This was one of the most frightening and difficult moments in Ebola in Liberia. It was during those very frightening days where, you know, you had predictions of a future of 10,000 cases a day maybe in January. That’s what the CDC and WHO were predicting. Liberia basically had run out of space to bury bodies in the county that includes Monrovia, the capital of Liberia,” he said.

Hymowitz said in Guinea, President Alpha Condé “mobilized funds” from a tight budget to buy protection equipment and ambulances -- and pay those who responded to the crisis.

“In the early days of the response, before there had been the major international mobilization of resources, you had to find the resources. And again, I think that’s another very good example of leadership from the top to get things moving.”

The report said leaders are a symbol and must be seen to lead, adding they can delegate work, but not accountability.

It recommended that systems and structures be put in place to allow the government to make the right decisions. It said there are two important lessons for effective response: keep it simple, get it started and adapt it; and work out what information decision-makers need.

Hymowitz said credit must also be given to local heroes in the fight against Ebola. He gave the example of a woman he worked with in Monrovia.

“Very late in the epidemic in Liberia there was a situation where 30 gang members had been exposed to the disease. And it was a real risk that they might infect others in the city. And it was a young Liberian woman named Priscilla Dilah who was able to negotiate with the gang and convince them to self-quarantine and basically spend the next 21 days in isolation together.”

The Tony Blair Africa Governance Initiative also has recommendations for international partners, who are also described as heroes. It said that “the response was most effective when international partners supported the governments’ leadership, strategies and plans, rather than pushing their own.” Donors, it said, must be clear about what they can and cannot do – and be ready to adapt to ever changing situations.

AGI recommended using the lessons learned from Ebola to help Guinea, Liberia and Sierra Leone recover from the epidemic.