Update Required To play the media you will need to either update your browser to a recent version or update your Flash plugin.
Joe DeCapua
April 20,2015


A new study says the hippopotamus is very important to the health of Africa’s rivers and lakes. That’s because hippos produce a key ingredient for aquatic life -- and a lot of it. But researchers warn that hippo populations are on the decline and that could damage ecosystems.

The mighty hippopotamus is the third largest land mammal following the elephant and rhinoceros. Its name is derived from the ancient Greek for river horse. Hippos spend up to 16 hours a day in the water and venture on to land at night to feed. They eat tropical grasses, more than 200 kilograms per meal. And what goes in must come out. And there is the magic ingredient for Africa’s aquatic ecosystems – dung.

Douglas McCauley and his colleagues decided to study it. 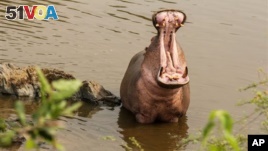 In this photo taken Sunday, Jan. 18, 2015, a hippo bathes in the Serengeti National Park, west of Arusha, northern Tanzania. The park is the oldest and most popular national park in Tanzania and is known for its annual migration of millions of wildebeests, zebras and gazelles. (AP Photo/Mosa'ab Elshamy)

“Well, we started looking at hippopotamus and realized that a big part of the story was their poop – was this vast amount of nutrients and energy that are moved across systems via their eating and their defecation,” he said.

McCauley is an assistant professor of ecology, evolution and marine biology at the University of California Santa Barbara. He said hippos cross the boundaries of ecosystems.

“Transiting between two different domains – between land, the terrestrial world, and then the aquatic world – means that there are also these important nutrient vectors. Because their eating lots and lots of stuff on land and then taking that all back to the place where they rest in the water -- in lakes and rivers -- and then basically dunging that all out. And it turns out when you start crunching the numbers to be a huge amount of material and energy and nutrients of this sort of natural fertilizer that is moved across these boundaries,” he said.

So, each hippo contributes, if you will, over 60,000 kilograms of dung to African lakes and rivers every year.

“It’s a big animal,” he said, “We’re talking about an animal that’s about 4,000 to 8,000 pounds. So, it’s got a big appetite. When you look across the entire continent and our estimate of how many hippos we now have in sub-Saharan Africa that comes out to millions of kilograms.”

So, by now you understand it’s a tremendous amount of dung. But did you know that hippo dung looks like straw?

“That’s right. So, they are mostly feeding on grass, sort of a straw-like grass. In fact, a lot of African grasses are used as straw and forage for cattle in places like America. So, they have these wonderfully well-developed lips that they use like a lawnmower to go across these short grass lawns that they actually manicure. And they keep them short because it seems to keep this resource accessible just to them,” said McCauley.

McCauley said it’s even used as a communication device.

“They actually use dung as a kind of signal amongst themselves. So, a male animal will dung at a sub-dominant male. They actually fling it back and forth with their paddle-like tail.”

But the really important thing about hippo dung is its place in the food chain.

“Well, there’s a lot of good stuff in dung. There’s a lot of nitrogen, carbon, even a bit of phosphorus. And some of these nutrients can be limiting in river systems. These are sort of the building blocks of life in some cases. So it really is injecting more of this food into these rivers. And a lot of the animals it seems in the rivers are quite happy to receive it. Some of them eat it up directly and some consumers, like fish, will eat insects that started their lives feeding on dung,” he said.

McCauley actually described it as a life force in Africa’s rivers and lakes. But he said if the water flow is too low, the dung could overwhelm the ecosystem and be a pollutant. Too much water and its value is diluted.

But as researchers learn more about the importance of hippos, there are fewer of them.

“Hippos are declining across sub-Saharan Africa. In the past decade or so, we’ve seen about a 10 to 20 percent decline in their numbers. And beyond how many there are they’re in a lot fewer places. There are entire countries that have completely lost hippopotamus -- Egypt, for example. Hippos used to be an iconic god. It was the god of birth in Egypt. You see the hippo god. It’s a goddess turning up on amulets and wands and swords,” he said.

McCauley said humans are responsible for most of the decline in the hippo population through hunting and habitat loss as human populations spread.

“They have to have water. Well, guess what? Everybody else wants water. And it’s really unfortunate if you’ve tied your fate to water because when you compete with humans for water you often lose. So, people want water from rivers and lakes for building out cities – for helping to cool turbines– or damming rivers,” he said.

It’s estimated hippos kill about 3,000 people a year. The animals may attack, for example, if people get too near a mother and calf.

McCauley said careful thought must be given to the management of water, both for humans and wildlife. He says if managed intelligently, there should be plenty of water to go around, adding that the fates of humans, wildlife and ecosystems are closely tied together.

The study appeared in the journal Ecosphere.