Update Required To play the media you will need to either update your browser to a recent version or update your Flash plugin.
By VOA
Jul 28, 2017


Swaziland has a problem: It has the world's highest prevalence of HIV, the virus that causes AIDS. According to UNAIDS, in 2016, 220 thousand people out of a population of about 1.5 million were living with HIV, including 27.2 percent of all adults ages 15 to 49. Last year, 3,900 citizens of Swaziland died as a result of the HIV virus, and 8,800 were newly infected. In 2016, life expectancy for men was 52 years, 51 years for women.

Ten years ago, the government of Swaziland made a commitment to stabilizing the epidemic, with an eye to eventually reversing it. With the support of the U.S. government, through the President's Emergency Plan for AIDS Relief, or PEPFAR, the Ministry of Health and other partners expanded access to comprehensive HIV prevention, care, and treatment services for all persons living with HIV/AIDS. 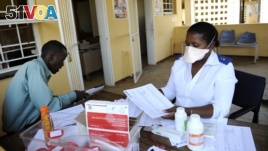 A patient waits for his pills as he meets with a nurse in Swaziland.

The effort has proven to be a success. On July 24th, PEPFAR issued groundbreaking data showing that the HIV epidemic is coming under control across all age groups in Swaziland.

Additional PEPFAR-supported studies released in December 2016, show similar results in Malawi, Zambia, and Zimbabwe. The rate of new HIV infections in these countries has decreased by more than 50 percent, and in Swaziland, by nearly half.

Malawi, Swaziland, Zambia, and Zimbabwe are among the 13 highest-burden countries where PEPFAR is accelerating its efforts toward reaching epidemic control by 2020 through the UNAIDS 90-90-90 framework and expansion of HIV prevention, while simultaneously sustaining support to all countries and populations where it works.

“These unprecedented findings demonstrate the remarkable impact of the U.S. government's efforts, through PEPFAR and the Global Fund to Fight AIDS, Tuberculosis and Malaria, in partnership with African countries. We now have a historic opportunity to change the very course of the HIV pandemic.”