Keeping the Pressure on ISIS

Update Required To play the media you will need to either update your browser to a recent version or update your Flash plugin.
By VOA
Nov 26, 2017


2017 has been a bad year for ISIS. Over the past 10 months, the terrorist group has lost its hold on all strongholds in Iraq and nearly all the territory it once held there. In Syria, its territory has shrunk to little more than the central Euphrates river valley. And with the loss of its two capitals, Mosul in Iraq and Raqqa in Syria, its false, self-proclaimed Caliphate is no more.

Nonetheless, that does not mean that the threat is gone and we can stop fighting. On the contrary, we must double down, remove ISIS' grip on the last of its footholds, even as we continue to rebuild the towns and cities damaged by ISIS and the long, bloody fight to dislodge it. 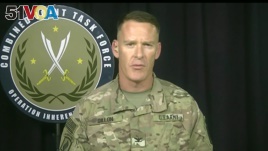 In Syria, the global coalition continues supporting the Syrian Democratic Force through surveillance, combat advice, and continued precision strikes targeting the terrorists. “We will continue to deprive ISIS remnants of their resources and safe havens, and continue our defeat-ISIS missions so long as they pose a threat,” said Colonel Ryan Dillon, spokesman for the Combined Joint Task Force - Operation Inherent Resolve during a recent briefing.

The coalition also supports stabilization efforts, to help Syrian cities like Raqqa and Tabqa to recover, and its people to return home. “Many of these stabilization efforts in Syria are coordinated through the U.S. State Department's Syrian Transition Assistance and Response Team, or START, which supports the locally led civil councils,” said Colonel Dillon.

Across the border in Iraq, the stabilization effort is well on the way. Here again, the U.S. offers support, with USAID-lead projects like, for example, rehabilitation of the water network, electricity substation and schools in Shirqat.

At the same time, Iraqi Security Forces continue to clear Western Anbar province of the final remaining ISIS holdouts there.

“Despite recent and significant military successes against [ISIS], the threat of its hateful ideology persists,” said Colonel Dillon. “We must and will pursue them and we will remain committed to partner support that enables the enduring defeat of these criminals. We are proud to stand by our Iraqi and Syrian partners as they continue to strive toward a better life for future generations.”