Kerry on the Global Demining Initiative for Colombia

Update Required To play the media you will need to either update your browser to a recent version or update your Flash plugin.
By VOA
Oct 1, 2016


One of the kick-off events for the United Nations General Assembly week was a ministerial pledging meeting for the Global Demining Initiative for Colombia.

The United States and Norway are co-leading the Global Demining Initiative for Colombia. Unexploded ordnance and mines continue to take thousands of lives. More than 11,000 Colombians have been wounded or killed by landmines and unexploded ordnance over the past 25 years.

The demining initiative, said Secretary Kerry, is both a humanitarian necessity and a boost to peace. In particular, demining will allow Colombia's farmers to reclaim valuable farmland for productive uses as an alternative to coca leaf production – land which is now off limits because of the existence of landmines. 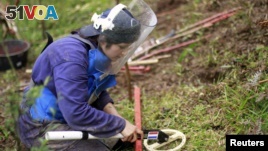 A woman from the countryside practises searching for landmines during a training session involving mock landmines in El Retiro, Antioquia January 23, 2013. A law allowing civil organizations to carry out mine clearance in Colombia was approved in December

Years of experience have demonstrated that it takes time, money, experts, and hard work in order to identify and clear mines, and to educate the local populations about the dangers. The goal of the initiative is to raise international awareness, funds, and resources in order to help Colombia reach its Ottawa Convention goal of being landmine-free by 2021. At the ministerial, the United States and Norway, along with the European Union and 19 other countries collectively pledged $105 million to the initiative.

The United States and Norway are committed to achieving lasting results in demining not only in Colombia, but across the globe. Both countries envision a world where international peace and security can take root in places where landmines and unexploded ordnance are no longer a threat.