Russia Braces for Another Hit Over Olympic Doping

Update Required To play the media you will need to either update your browser to a recent version or update your Flash plugin.
By Daniel Schearf
Nov 3, 2016

Russia spent $50 billion on the 2014 Sochi Winter Olympics, making it the most expensive in history and among the most impressive. Russia dominated the Sochi games, winning 33 medals and attracting a new generation of winter sports fans.

"At the moment Sochi is a resort that is easily accessible, and people want to ski there, so after the Sochi Olympics it has become more popular," says skiing instructor Igor Minayev, "Skiing and snowboarding have become more popular."

But a second investigation by the World Anti-Doping Agency could see some of Russia's Sochi champions stripped of glory. 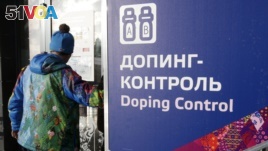 FILE - A man walks past a sign reading "Doping Control" in Russian at a 2014 Sochi Winter Olympics site in Krasnaya Polyana, Russia. Feb. 21, 2014. Moscow has been under fire for months over allegations of state-run doping.

"That would hurt as I understand that politics are connected with this," says amateur snowboarder Natalya, "I will still cheer, and hope for more justice."

Russia defiantly held its own “Olympics Day” after its athletics team was banned from Rio's summer games in August over allegations of state-run doping.

Russian officials deny state involvement. But some, including the Olympic Committee president, have quietly resigned.

Russia's sports minister, named as a top figure in the scheme, was promoted to deputy prime minister.

"There has never been a negative attitude to doping in our country," says Vinokurov. "One was sympathetic to everybody. Nobody was seriously punished. The international sanctions were naturally accepted and observed, but nobody was punished."

But more Russian athletes are acknowledging that widespread doping is a problem that needs to be addressed.

"Yes, there used to be a medication that we all took when I was a player," says amateur and kids hockey coach Ostap Klivchenko. "It is not allowed for use now. It helps the heart. Those who did not succeed in stopping to use it in time, could not participate in important competitions like the world championship or world junior championship."

To achieve those dreams, he says, players need to train hard, be aware of forbidden drugs, and not make the same mistakes as players of his era did.