The Significance of the Marshall Plan

Update Required To play the media you will need to either update your browser to a recent version or update your Flash plugin.
By VOA
Apr 19, 2018


70 years ago this month, the United States implemented the European Recovery Program, better known as the Marshall Plan, in an effort to stabilize war-shattered Europe, and help it restore its industrial and agricultural production. Between April 1948 and December 1951, the United States poured 13 billion dollars in direct investment into 17 Western European countries, including former foes Germany and Italy. In today's money, that's around 130 billion dollars. It was one of the most successful U.S. foreign policy moves of the 20th century. 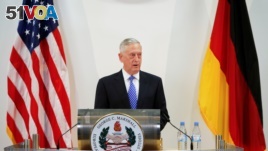 U.S. Defense Minister James Mattis at a press conference before the commemoration of the 70th anniversary of the Marshall Plan in Germany. (June 28, 2017.)

The Marshall Plan, named after then-Secretary of State George Marshall, was even more remarkable when viewed in the context of what took place after other wars, said Assistant Secretary for European and Eurasian Affairs Wes Mitchell at the Marshall Plan 70th Anniversary Commemoration. “In most of history's previous wars, the victor had sought to either extinguish the vanquished or to restore its own national strength by drawing upon the resources of the conquered”:

“Rather than punishing our enemies or retreating from Europe's problems as we had done after 1918, America's leaders chose to remain in Europe—and to use our great national wealth to nourish and rebuild its shattered societies. As Secretary Marshall said in 1947 the United States would “do whatever it is able to do to assist in the return of normal economic health in the world, without which there can be no political stability or assured peace.”

“After 1945, the task was one of creation – to forge new relationships and to bring fruition to a new reality that could not have previously been imagined. Today our task is preservation – to rally and conserve the West as a realm of ordered liberty against threats that few would have dreamed possible in the heady days after the fall of Communism,” said Assistant Secretary Mitchell.

“Commemorations ...are important for reminding both sides of the Atlantic that allied cohesion is of inestimable valuable, but also that it requires sacrifice to maintain. Our grandparents' ...generation grasped that fact after the Second World War. It is up to us to ensure that the peace and prosperity they helped to broker, and from which we have benefited in our lifetimes, is extended to future generations.”