Update Required To play the media you will need to either update your browser to a recent version or update your Flash plugin.
2014-12-13

"North Korea continues to have the world’s worst human rights situation,” U.S. Special Representative for North Korea Policy Sung Kim recently told international media in Tokyo, Japan. “The fact that the human rights resolution passed so decisively [in the United Nations General Assembly Third Committee] is a clear reflection of the international community’s concerns about the situation in North Korea. " 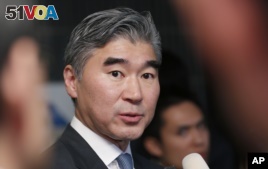 The UN Third Committee’s annual resolution condemning the human rights situation in the DPRK was adopted in November by an overwhelming vote. The UN Third Committee DPRK resolution will be voted on by the UN General Assembly plenary next week. Ambassador Kim spoke about the deep concern the United States holds for the well-being of the North Korean people and the deplorable human rights record North Korea continues to hold.

Ambassador Kim said that the United States would make a strong effort on dealing with the DPRK’s human rights issue and the nuclear issue.

"North Korea has various international obligations and commitments to cease their nuclear activities. We will work with our Six-Party partners to make sure the North Koreans live up to their commitments and obligations."

When asked about the resumption of the Six-Party Talks, Ambassador Kim said, “We are very much open to diplomacy [with the North Koreans]. We would like to make a real effort toward denuclearization, but it’s hard to do so unless the North Koreans are ready to work with us, and that’s what we are waiting to see from the North Koreans.”