Creeping Lava Has Hawaiians on Edge

Update Required To play the media you will need to either update your browser to a recent version or update your Flash plugin.
Mike O'Sullivan
January 30,2015


PAHOA, HAWAII— Kilauea, one of the most active volcanos on Earth, has been erupting for more than 30 years. But lava from a vent near Pahoa that started bubbling up last June has been edging toward the town, outside the city of Hilo.

It has become a tourist attraction, and a trash transfer station where the lava has claimed a home.

At the Hawaiian Volcano Observatory, scientist Jim Kauahikaua of the U.S. Geological Survey said the lava flow is intermittent. 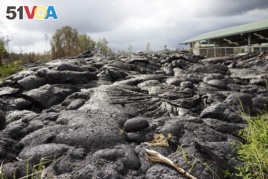 This photo of the Kilauea lava flow at Pahoa, Hawaii, was taken Jan. 22. The lava is now flowing on another, nearby leg.

“For a brief period, we were trying to forecast that, and every one of those forecasts was wrong because of this start-and-stop feature," he said. "So the USGS and Civil Defense are still trying to give people the idea of maybe the worst-case scenarios and such, but there’s virtually no way of forecasting more than a day or two in advance.”

In Honolulu, University of Hawaii researcher Bruce Houghton is analyzing the eruption using high-speed photography. He said that our understanding of volcanoes is improving with input from many scientific disciplines.

“Bits from chemistry, bits from physics, and always with an overlay of social science, because when all is said and done, it doesn’t matter how well we predict the behavior of the volcano," he said. "If the behavior of the community is inappropriate for what’s happening, then you still get a disaster."

In Pahoa, weekly meetings update the residents, as the lava approaches within 500 meters of the local highway. Some businesses are open, while others have relocated.

Business owner Constance Rojcewicz is keeping an eye on the creeping lava.

“We’ve discovered the stress level on families, on interpersonal relationships, on children — that’s the crisis right now,” he said.

“When the lava flow comes through, its effects remain for hundreds of years," he said. "The hardened lava rock remains there for a very long time. But that’s how the islands were built. That’s how we grow as a state.”

Rosario said the volcano is a part of life on these islands.