Update Required To play the media you will need to either update your browser to a recent version or update your Flash plugin.
By Ray McDonald
Jan 6, 2017


We're blasting off with the five most popular songs in the Billboard Hot 100 Pop Singles chart, for the week ending January 7, 2017.

Our first lineup of the new year is a keeper: not only do we welcome a new song, but the championship also changes hands.

Let's get it going in fifth place, where Zay Hilfigerrr and Zayion McCall jump three slots with “Juju On That Beat (TZ Anthem).”

Here in 2017, “Black Beatles” isn't the only viral video phenomenon to impact the Hot 100 chart. These two Detroit teenagers have been YouTube favorites for months, as dozens of dance videos pop up featuring their breakout song. The pair have signed with the Atlantic label and are working on their debut full-length album. 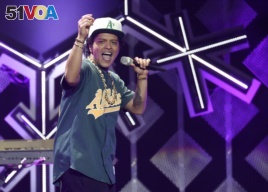 Holding in fourth place is Bruno Mars, with “24 K Magic.” Forbes Magazine just made a fearless prediction about Bruno. A recent article penned by Zack O'Malley Greenburg predicts that 2017 will see Bruno Mars return to the ranks of music's highest earners. He made the list in 2014 and 2015, but was absent last year while he worked on his album. The writer predicts that Bruno's world tour, which kicks off in late March, will return him to the financial stratosphere.

The Chainsmokers and Halsey spend another week in third place with their former 12-week champ “Closer.” Chainsmokers members Drew Taggart and Alex Pall just signed an exclusive three-year residency deal with Wynn Entertainment in Las Vegas. That means if you want to see The Chainsmokers in Vegas you'll have to go to Wynn's properties XS and Encore Beach Club where the duo will be performing through 2019.

Last week, Rae Sremmurd ruled the Hot 100 with “Black Beatles.” This week they drop to second place. Group member Swae Lee tells TMZ that he'd like to connect with President Obama's elder daughter Malia. So far, the White House has no comment.

It's a huge week for The Weeknd, and Daft Punk as well: “Starboy” jumps that all-important final slot to number one. This marks the Weeknd's third trip to the top of the Hot 100, and the first for Daft Punk.

Will “Starboy” build on its momentum or is another change around the corner? Join us next week for all the action!