Top 5 Songs for Week Ending May 13

Update Required To play the media you will need to either update your browser to a recent version or update your Flash plugin.
By Ray McDonald
May 12, 2017


We're launching the five most popular songs in the Billboard Hot 100 pop singles chart, for the week ending May 13, 2017.

The chart again rises to the occasion, giving us another big new hit.

That was the eighth plaque Future earned in the month of April from the Recording Industry Association of America. To top it all off, he's currently on a headlining tour of North America. 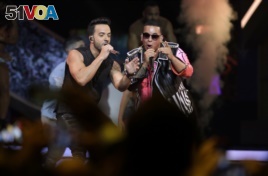 For the past three weeks, fourth place has been where the action is. That's the case today, as Luis Fonsi and Daddy Yankee jump five slots with “Despacito” – featuring Justin Bieber singing in Spanish for the first time.

How did this collaboration come about? Luis says Justin approached him about doing this track: it was already a global hit when Justin heard it in a Colombian club. Luis also says it was Justin's idea to sing in Spanish. The same day this song appeared, Justin Bieber sang it in concert in Puerto Rico.

Kendrick Lamar is no longer your Hot 100 champ, as “Humble” drops to third place.

A scam artist claiming to be Adele's manager tried to cheat Kendrick's label out of $250 concert tickets. Police say a man named Justin Jackson e-mailed Interscope Records claiming to be Adele's manager. He requested three free tickets to the Rolling Loud Festival in Miami, where Kendrick was performing. Kendrick's people promptly called Adele's real rep and the deception was revealed.

Police arrested Jackson and his wife. It turns out Jackson has a lengthy arrest record and once impersonated Madonna's manager.

Ed Sheeran is an honest runner-up for the second straight week with “Shape Of You.” How does Ed keep sane on the road? He says he relies on 12 long-time friends to keep him grounded when fame and the rigors of touring get to be too much. In fact, he employs four of them.

We greet a familiar face at number one: Bruno Mars notches his seventh career Hot 100 title, as “That's What I Like” jumps two slots.

Can Bruno keep it going? We'll find out in seven days!