Update Required To play the media you will need to either update your browser to a recent version or update your Flash plugin.
By VOA
Jul 6, 2017

President Trump said, “The friendship between the United States and India is built on shared values, including our shared commitment to democracy.”

The United States looks forward to working with India on increasing jobs, growing their respective economies, and to creating a trading relationship that is fair and reciprocal. “It is important that barriers be removed to the export of U.S. goods into [India's] markets, and that [the U.S.] reduce its trade deficit with” India, said President Trump. 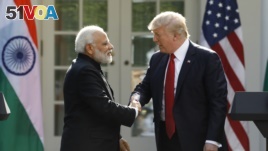 In particular, President Trump noted Indian Airlines recent order of 100 new American planes. It is “one of the largest orders of its kind,” he said, which underscores the value of our trading relationship “We're also looking forward to exporting more American energy to India as [its] economy grows, including major long-term contracts to purchase American natural gas.”

Finally, the security partnership between the United States and India remains important. Both nations have been struck by the evils of terrorism, and both are determined to destroy terrorist organizations and the radical ideology that drives them. “Our militaries are working every day to enhance cooperation between our military forces,” said President Trump. In July, the Indian and U.S. Navies will join together with the Japanese navy to take part in the largest maritime exercise ever conducted in the Indian Ocean.

“Working together,” said President Trump, “I truly believe [the U.S. and India] can set an example for many other nations, make great strides in defeating common threats, and make great progress in unleashing amazing prosperity and growth.”