Virtual Reality Goggles May Be Next Must-Have

Update Required To play the media you will need to either update your browser to a recent version or update your Flash plugin.
George Putic
February 23,2016

The market is huge and there's plenty of money to be made, but there's a design challenge for manufacturers.

"How do you differentiate a rectangular block with a touchscreen, a battery and a camera?” said Ben Wood, chief of research at CCS Insight. “What we've seen at Mobile World Congress is some of the manufacturers addressing that with some of the launches they've delivered."

Mobile World Congress, one of the world's biggest mobile shows, is taking place through Thursday in Barcelona.

For Sony, the focus is on the phone's camera. Its Xperia X phone has a camera that is ready to take a picture in less than 0.6 second.

For LG, the new G5 has a modular design and an assortment of attachments that add battery life and upgrade the phone's camera function.

For Samsung, the Galaxy S7 has a larger battery and the ability to add memory — as much as 200 gigabytes.

But these gadgets cost a lot, so manufacturers in China and India are coming out with cheaper smartphones.

"We are seeing a swing from developed markets to developing markets,” said Neil Mawston of Strategy Analytics. “So, more Chinese brands. More Indian brands. And I think, potentially, also more African brands in the future, as well." 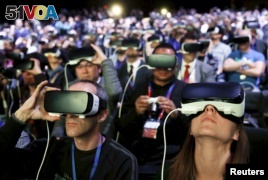 But with cameras that can shoot 360 degrees, another opportunity is opening up: virtual reality. Samsung is already pairing its phone with VR goggles.

"These are the devices that are going to generate loads of content,” Wood said, “and user-generated content is going to be key to driving the market."

Manufacturers are hoping that, very soon, almost everybody will want a set of VR goggles for gaming, exploring distant places or mingling with friends and family who are not physically present. And connectivity may soon be available to new areas.

"We are, this year, going to launch our first satellite over Africa in order to be able to work with operators to extend connectivity and beam down Internet there," said Mark Zuckerberg of Facebook.

CCS Insight predicts that by the end of this year, consumers will buy as many as 13 million virtual reality headsets.