Can DNA Be Used to Store the World’s Computer Data?

Update Required To play the media you will need to either update your browser to a recent version or update your Flash plugin.
By Bryan Lynn
17 July, 2019


The need to store more and more computer information is rising across the world.

The technology research company International Data Corporation, or IDC, has predicted a huge increase in total worldwide data in the coming years. IDC estimated this growth in measurements of zettabytes. A zettabyte is equal to one billion terabytes, another measure of computer information storage. It would take one billion one-terabyte (1TB) hard drives to hold one zettabyte. IDC predicted world data demand will grow from 33 zettabytes in 2018 to 175 zettabytes by 2025.

Such growth is expected to create a big need to increase data storage in the future. A recent World Economic Forum (WEF) report predicted that the world is "about to have a serious data-storage problem that will only become more severe over time." 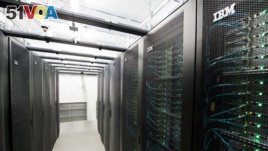 DNA stands for deoxyribonucleic acid. It is the substance that carries genetic information in the cells of living things.

Developers say one of the main reasons DNA would be good for data storage is because of its great density. Experts have estimated DNA systems could store one billion times the amount of data held in traditional electronic devices of comparable size.

Information about living things is stored in DNA using four different kinds of molecules. They can be represented by the letter codes A, T, C and G. Researchers have discovered that data can also be stored within DNA in the sequences of these letters. Electronic devices, however, store information in a two-letter code that produces combinations of ones and zeroes.

For DNA storage to succeed, digital information has to be converted to DNA storage and then back to digital data.

One company working on DNA storage development is American software maker Microsoft. The company announced earlier this year that it had demonstrated the first "fully automated" DNA storage system.

Researchers from Microsoft and the University of Washington discussed their results in a paper in Nature Scientific Reports. The research team reported it had successfully encoded the word "hello" in pieces of DNA and converted it back to digital data. A chemical process is used to get the DNA into a storage device.

Microsoft said the information is stored in DNA molecules created in a laboratory, not DNA from humans or other living things. The company said its goal is to further develop the DNA storage to operate in a similar way to current cloud storage systems.

Microsoft said not only can DNA storage systems store more data, they can hold data for much longer periods of time. For example, DNA samples from the ancient bones of animals and humans have proven that the material can last thousands of years in harsh conditions.

Microsoft said the team had demonstrated its DNA system could store photographs, written documents and audio and video material. Those materials were then successfully re-collected from the DNA without errors, the company reported.

Another U.S. company, Catalog, said it also has successfully created a process that uses artificial DNA to store digital information.

The company recently announced that it had encoded the English version of the Wikipedia website into DNA molecules. The total amount of data was 16 gigabytes, Catalog said. The company said the process was completed using a "DNA data writer" that operates in a similar way to a printer.

Experts from the World Economic Forum have praised recent developments in DNA storage technologies. But the organization says much more work needs to be completed before DNA storage systems can effectively compete with electronic ones. Currently, the systems are costly and processing times can be very long.

Bryan Lynn wrote this story for VOA Learning English, based on reports from Microsoft, the World Economic Forum and other online sources. Mario Ritter Jr. was the editor.

Do you think DNA storage has a bright future in helping to handle the world's rising data needs? Write to us in the Comments section, and visit 51VOA.COM.

hard drive – n. the part of a computer that stores large amounts of information

density – n. the number of things in a place when compared to the size of the place

sequence – n. a series of related things that appear in a particular order

convert – v. to change the appearance or form of something

automated – adj. something that is controlled by itself

cloud storage – n. a way to store and regularly access computer data on multiple servers through the internet

artificial – adj. not real or natural