Update Required To play the media you will need to either update your browser to a recent version or update your Flash plugin.
By Bryan Lynn
09 September, 2017


China will again lay claim to operating the fastest bullet train service in the world.

The South China Morning Post reported the change will cut travel time by one hour on the 1,300 kilometer trip between Beijing and Shanghai. The faster Beijing-Shanghai trains will begin September 21 and additional lines will also be launched, according to the newspaper.

China already has several of the world's fastest operating trains. The fastest is a non-bullet train - the Shanghai Maglev - that can reach speeds up to 430 kilometers an hour. The train is limited to carrying passengers from Shanghai's center to the city's airport. 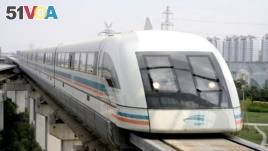 In this file photo, a maglev train runs in this Sept. 25, 2006 file photo in Shanghai, China. (AP Photo/Eugene Hoshiko, File)

The term maglev stands for magnetic levitation. In this system, train vehicles are kept off the ground and powered by magnets. High-speed bullet trains have wheels and run on a track.

The second-fastest train in the world is the one running between Beijing and Shanghai, according to the website Railway Technology.

China also has more high-speed rail lines than anywhere else in the world - covering about 19,000 total kilometers, according to the Associated Press.

How fast are trains in other countries?

The fastest non-operating train in the world - undergoing testing in Japan - has reached a top speed of 603 kilometers per hour. It is a Japan Railway maglev train.

In Europe, Germany, Italy and Spain all have trains that can travel more than 320 kilometers an hour.

In the United States, the Amtrak Acela Express – which connects several eastern cities - is the country's fastest train. It can travel at a top speed of 241 kilometers an hour.

Last year, Amtrak received a $2.45 billion loan from the U.S. government to help develop new high-speed trains expected to launch in 2021. Amtrak says those trains are designed to travel up to 300 kilometers an hour, but will begin service at about 260 kilometers an hour.

U.S. company Hyperloop One is continuing to test its own high-speed transport system.

Hyperloop is being developed by businessman Elon Musk. He created and owns the aerospace company SpaceX, as well as electric carmaker Tesla. Hyperloop operates in a similar way to maglev trains, but uses vehicles called pods. An electromagnetic force causes the pods to "float" on air inside a series of steel tubes. The system forces air out of the tubes to reduce pressure and lower the resistance for the vehicles.

Musk has said he plans to keep developing the Hyperloop system, which he hopes will eventually greatly reduce travel times between major U.S. cities. He previously said Hyperloop would be designed to reach a top speed of about 1,200 kilometers an hour.

To most experts, that goal seems out of reach in the near future. However, a Chinese aerospace company just announced plans to build a super high-speed train that it says could reach a speed of 4,000 kilometers an hour.

An official at China Aerospace Science and Industry Corporation recently spoke about the project during a conference in China, the state-run China News Service reported.

The official said the planned train would use maglev technology, combined with a Hyperloop-style tube system. He said a project team is currently working with dozens of researchers and companies to develop the world's first "high-speed flying train."

Bryan Lynn wrote this story for Learning English, based on reports from Reuters, the Associated Press and other sources. Hai Do was the editor.

levitation – n. making something rise into the air

electromagnetic – adj. pertaining to a magnetic field that is produced by a current of electricity

style – n. a particular kind of something