Update Required To play the media you will need to either update your browser to a recent version or update your Flash plugin.
By Pete Musto
24 March, 2018


A group of past students at the former Corinthian Colleges are taking legal action against the United States Department of Education.

In early March, the former students made the claim that the department illegally gained information about how much money they earn. The students say the agency used the Social Security Department data to limit their student loan debt relief.

Corinthian Colleges was a for-profit higher education company that operated several schools across the U.S. and Canada. In 2015, the U.S. government found evidence it was defrauding its students.

The Department of Education made the company pay a $30 million fine. Shortly after, Corinthian closed its operations and declared bankruptcy, or financial failure. The company then sought legal protection from its debts and a plan for reorganizing.

In 2016, Corinthian was found to owe about $300 million to non-student debtors. The state of California also won a judgement against Corinthian of more than $1 billion for former students. 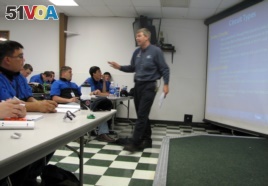 In this June 30, 2009 file photo, Larry Wostenberg teaches an engine management systems class at the WyoTech technical school, which was operated by Corinthian Colleges Inc, at their campus in Laramie, Wyoming

Instead, the Education Department will now compare average incomes among Corinthian students to those of other universities. It will use this information to decide how much of an individual loan should be forgiven.

For example, former Corinthian nursing students who earn less than 50 percent of the average amount earned by nursing graduates from other schools will get full debt relief. But if they earn more than 70 percent of that average income, only 30 percent of their loans will be forgiven. 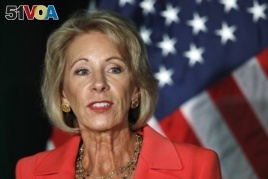 DeVos said in December that "No fraud is acceptable, and students deserve relief if the school they attended acted dishonestly." But, she added, the new process protects taxpayers from being required to share this responsibility.

Now, a group of Corinthian students in California say her decision is a violation of several laws and the U.S. Constitution.

Joshua Rovenger is one of the attorneys representing the students. He said the department "has secretly and illegally co-opted Social Security data to try to argue for something less than the complete cancellation and refund that these borrowers are due."

The group has taken its case to federal court. They are asking the Education Department to change its decision. The latest legal action is part of a larger case against the department on the part of former Corinthian students.

Rick Hess argues that DeVos' methods mark the best path forward. He is the head of education policy at the research group the American Enterprise Institute.

He told the Associated Press, "Any of us who has ever taken a loan for a house or car or a degree would like 100 percent loan forgiveness. We also pay taxes and we want people who borrow public dollars ... to repay them."

However, Sarah Dieffenbacher strongly disagrees. She is a health care worker and mother of four children who studied at Everest College, a Corinthian school in Ontario, California. She borrowed about $67,000 to train in the legal field, yet was unable to get any job in that field.

She received a letter saying the agency would only relieve 50 percent of her student loans. Dieffenbacher told the Associated Press that the decision was completely unfair.

"I think it's an insult to my intelligence, I think it's a kick in my face," she said. "I received no valuable education from them."

Pete Musto wrote this story for VOA Learning English by reporting from the Associated Press and other sources. Caty Weaver was the editor.

We want to hear from you. How should the U.S. government react to the demand of the defrauded students? What responsibility do government haves for protecting citizens from fraud? Write to us in the Comments Section or on 51VOA.COM.

relief – n. the removal or reducing of something that is painful or unpleasant

defraud(ing) – v. to trick or cheat someone or something in order to get money

nursing – n. the job of taking care of people who are sick, injured, or old

attorney(s) – n. a person whose job is to guide and assist people in matters relating to the law

co-opt(ed) – v. to use or take control of something for your own purposes

refund – n. an amount of money that is given back to someone who has returned a product or paid too much