Georgia Is First Former Soviet Republic to Legalize Marijuana Use

Update Required To play the media you will need to either update your browser to a recent version or update your Flash plugin.
By Bryan Lynn
04 August, 2018


Georgia has become the first former member of the Soviet Union to legalize use of marijuana. Yet Georgians are still barred from growing, storing or selling the drug.

Georgia's constitutional court ruled on marijuana late last month. The court said in a statement that marijuana use is an act "guaranteed by the right of free self-development."

The statement added that there are still some situations in which using the drug would be illegal. These are situations where marijuana presents "a threat to third persons," the court said. This would include use in schools, some public spaces and public transportation, as well as when children are present.

The ruling resulted from a case brought by activists of Georgia's Girchi party. One of those activists is Zurab Japaridze, a former lawmaker. Georgians remember seeing images of him planting marijuana seeds in a televised broadcast of a New Year's Eve event in 2016.

The Girchi party had long campaigned for the legalization of marijuana. Japaridze called the court's ruling a "big victory" that was years in the making. "This wasn't a fight for cannabis. This was a fight for freedom," he told reporters. 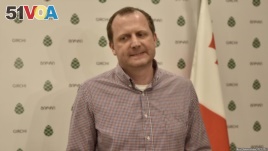 'This wasn't a fight for cannabis. This was a fight for freedom,' activist Zurab Japaridze said. (file photo)

In November 2017, the Constitutional Court decriminalized the use of marijuana and other forms of cannabis-based drugs. But it kept in place a non-jail punishment for marijuana use, a $200 fine.

Rights activists say the Georgian government has used drug enforcement policies to justify extreme policing methods at popular nightspots. In May, thousands of people demonstrated for several days in the capital, Tbilisi, to protest such police activities.

"The four judges are making disastrous decisions, ignoring the will of 4 million people," said Archbishop Andria. The church official called for the removal of the judges who decided the case.

But other Georgians who would like an easing of drug policies felt the ruling went too far. The head of a health care committee in parliament told reporters he thinks the use of marijuana should only be legalized for medical purposes.

"Our aim was not to make marijuana accessible for everyone, but to reduce the number of drug addicts."

Bryan Lynn wrote this story for VOA Learning English. His story was based on reports from VOA's Georgian Service, RadioFreeEurope/RadioLiberty and Agence France-Presse. George Grow was the editor.

cannabis – n. a plant used to produce hemp as a drug or for other products

decriminalize – v. change the law to make something no longer illegal

traitorous – adj. not loyal to your own country, social group or beliefs

nightspot – n. a business that serves food and alcoholic drinks, and provides music and a place for dancing