Update Required To play the media you will need to either update your browser to a recent version or update your Flash plugin.
By Gregory Stachel
12 June 2022


Egbontoluwa Marigi worked deep in a forest in Nigeria, a country on the western coast of Africa. He is a logger who cuts down trees using an axe and a machete.

The forest where he worked is in the Ondo State in southwest Nigeria. But many trees in that forest have been lost to illegal logging.

The 61-year-old father of two told Reuters that he could cut down over 15 trees anywhere in the forest, but he would be lucky to find two. 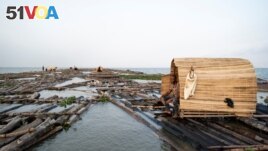 Egontoluwa Marigi, 61, sits in his shelter on his grouping of logs, while transporting the logs from Ondo State to Lagos State on the Lagos Lagoon, Nigeria on December 1, 2021. (REUTERS/Nyancho NwaNri)

"During the time of our forefathers, we had big trees but sadly what we have now are just small trees and we don't even allow them to mature before we cut them," Marigi said.

After cutting down the trees, Marigi put markers on them to let other loggers know that he is the owner. The cut-down trees, or logs, are then transported by waterways and rivers to Nigeria's most populated city, Lagos.

Trees in Nigeria are cut down to open land for farming or to feed the energy demand of a growing population. From 2001 to 2021, Nigeria has lost 1.14 million hectares of tree cover.

Global Forest Watch provides data and follows the state of the forests. The organization says that the 11 percent decrease in tree cover in Nigeria equals the emissions of 587 million metric tons of carbon dioxide, a greenhouse gas.

President Muhammadu Buhari spoke at a recent UN meeting on biodiversity, or the state of the biological environment, in Abidjan, Ivory Coast. He said that Nigeria has provided money to help regrow the country's forests. But that may not be enough as the country loses forests even more quickly.

Femi Obadun is the director of forest management for Ondo state's agriculture ministry. He said, "Protecting the forest means protecting ourselves. When we destroy the forest, we destroy humanity."

That is something Marigi knows well, but he must make a living.

Months after cutting the trees, Marigi returned to the forest to tie his 40 logs together so they could be transported. With other loggers, he paid for a tugboat to pull the logs through waterways from Ondo state to Lagos.

They built shelters on top of the floating logs to help protect themselves from the weather. Food was shared and they sang local songs to cheer themselves up. They did not sleep at night to make sure that the logs would not get away from the boat.

The boat stopped at several places to pick up more loggers and their logs. A single boat can transport thousands of such logs.

Marigi's trip ended in Lagos where logs from Ondo state and other parts of the country came together. The logs were then cut and sold to users.

allow – v. to permit (someone) to have or do something

mature – v. to continue developing to a desired level

tugboat – n. a small, powerful boat that is used for pulling and pushing ships especially into harbors or up rivers