Update Required To play the media you will need to either update your browser to a recent version or update your Flash plugin.
By VOA
25 March, 2016

The video, created by Clisare, has received more than 1.8 million views and 28,000 shares on Facebook. Clisare called the video, "Dear America." She talks to "America" from the point of view of "Ireland," a concerned friend who does not like America's choice in boyfriends.

Clisare begins her video by saying, "I've just been chatting with all of the other countries, and we just really think that Donald is not right for you. We'd hoped that you'd come to this conclusion by yourself, but it's looking like it needs to be said."

She tells America that if "you are going to make it official with Donald, you can't hang around with Britain anymore."

Earlier this year, lawmakers in the United Kingdom debated whether Trump should be barred from entering their country after more than 570,000 people signed an online petition calling for his ban. 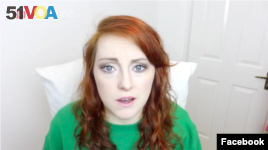 Clisare also says, "I know you think it's really romantic that he wants to build a wall around you to protect you, but that's...borderline psycho behavior."

Donald Trump himself has said he would build a large wall at the U.S.-Mexico border if he is elected president.

She even tells the U.S. she had a chat with Germany.

"Germany is worried about you. God knows Germany knows a bad relationship when they see it ... now."

She referred to the German chancellor Adolf Hitler, who was responsible for the death of millions in World War II.

This is not the first time Clisare has gone viral. Earlier this month, a Facebook video of Clisare explaining Irish pronunciation received more than 3 million views in just three days.

petition - n. a written document that people sign to show that they want a person or organization to do or change something

romantic - adj. thinking about love and doing and saying things to show that you love someone