Kamala Harris Is Historic Choice in Race with Biden

Update Required To play the media you will need to either update your browser to a recent version or update your Flash plugin.
By Bryan Lynn
09 September 2020

Presidential candidate Joe Biden made history by choosing California Senator Kamala Harris as his running mate. The Democratic Party nominee asked her to serve as the candidate for vice president.

Harris is the first Black woman – as well as the first Asian American - to compete on the presidential ticket of a major U.S. party. Last year, Harris entered the presidential race herself as a Democrat. This put her in direct competition with Biden.

The 55-year-old Harris is in her first term in the Senate. Her mother was a cancer researcher who came to the United States from India. Her father was an economist from Jamaica. The two met at the University of California, Berkeley and married in 1963. They divorced in 1971, when Kamala was seven.

Harris has often spoken about the deep relationship she had with her mother, Shyamala Gopalan, whom she has described as her single biggest influence.

When explaining to a crowd last year why she had decided to seek the presidency, Harris said she remembered her mother's solution to any serious test. "She'd say, ‘Well, what are you going to do about it?'" Harris said. "So, I decided to run for president of the United States."

One memorable incident in her presidential campaign came when Harris criticized Biden during a debate among the candidates. She accused Biden of making "very hurtful" comments about his earlier work with segregationist senators. She also condemned his opposition to busing students to schools outside their community in the 1970s.

"There was a little girl in California who was a part of the second class to integrate her public schools, and she was bused to school every day," she said. "And that little girl was me."

Shocked by the attack, Biden said her comments had misrepresented his position on the issue. 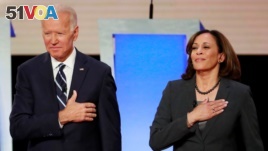 Harris decided to end her presidential campaign last December after struggling to raise money and rise to the top of the field in surveys of likely voters.

She became the second Black woman to ever win a Senate seat when she was elected in 2016.

Harris supports a ban on assault weapons, citizenship for undocumented immigrants and workplace equality for women and gays. However, some Democrats have questioned her record as a prosecutor in San Francisco and, later, her policies as California's top law enforcement official.

At one point, Harris declared, "If you carry an illegal gun in the city of San Francisco and your case is brought to my office, you are going to spend time in jail. Period." Another time, she said, "It is not progressive to be soft on crime."

The Biden-Harris campaign website says that as California's attorney general, Harris "worked to protect Obamacare, helped win marriage equality for all" and defended the state's climate change law. Obamacare is another term for the Affordable Care Act, which expanded the U.S. health care system. Top Republican Party lawmakers have sought to end the Affordable Care Act.

Biden's choice of Harris for vice president was not unexpected since he had been under pressure to choose a woman of color. His decision came as demonstrations continued across the country. Protesters were hoping to direct attention on racial injustice and police violence.

Harris has taken a stronger position on policing since the killing of George Floyd. The Minnesota man died in May after a police officer held his knee on Floyd's neck for nearly nine minutes.

Harris co-wrote legislation that would ban police from using chokeholds and no-knock arrest raids. The measure would establish national use-of-force rules and create a national police misconduct registry, among other things. It would also reform current rules that can shield police officers from liability.

Some political observers have suggested that Biden, who would be 78 if he wins and takes office in January 2021, might only serve a single four-year term. This would immediately set up Harris, who is over 20 years younger, as a leading choice for president in 2024.

In announcing her nomination, Biden called Harris a "fearless fighter for the little guy, and one of the country's finest public servants."

Harris said she was honored to join Biden on the Democratic ticket. "Joe Biden can unify the American people because he's spent his life fighting for us," she wrote on Twitter. She said she thinks Biden can help "build an America that lives up to our ideals."

Bryan Lynn wrote this story for VOA Learning English, based on reports by VOA's Ken Bredemeier, The Associated Press, Reuters and the Biden-Harris campaign. George Grow was the editor.

ticket – n. the candidates nominated by a political party during an election

divorce – v. to end a marriage through a legal process

gay – adj. sexually attracted to someone of the same sex

chokehold – n. a way of holding someone with your arm tightly around their neck so that they cannot breathe easily

no-knock – adj. a law that authorizes law enforcement officers to enter residences announced and without identifying themselves

liability – n. legal responsibility for something