Update Required To play the media you will need to either update your browser to a recent version or update your Flash plugin.
By Phil Dierking
03 May, 2018


NASA, the American space agency, is sending a robotic scientist to Mars. It will dig deeper than ever before to study the planet's geological activity.

The Mars InSight spacecraft launches May 5. On Mars, the spacecraft will use scientific instruments to take the first measurements of "marsquakes," or quakes on Mars. It will also measure the circular movement of Mars on its axis to better understand the size and makeup of its core.

The spacecraft's instruments will permit scientists "to stare down deep into the planet," said Bruce Banerdt. He is with NASA's Jet Propulsion Laboratory and the mission's chief scientist.

The $1-billion, joint U.S.-European mission marks the first study of the inside of Mars. Scientists hope the research will help them understand how Mars formed 4.5 billion years ago.

Mars is smaller and less geologically active than Earth. On Earth, geological movements over time have changed the planet's original makeup.

Mars, though, has more evidence of its early development, Banerdt said.

During the launch, InSight will also take two small satellites with it. After liftoff, the satellites will break free and then follow the spacecraft for six months as it travels to Mars. The satellites will not stop at Mars, though. Instead, they will fly past the planet. 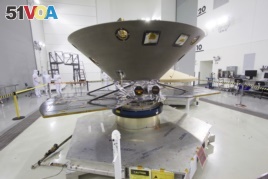 Scientists call the two satellites CubeSats. Their purpose is to test whether they can provide a communication link with InSight as it lands on Mars on November 26.

InSight will launch from central California's Vandenberg Air Force Base. It will be the first time that NASA has launched a mission to another planet from somewhere other than Florida's Cape Canaveral.

The trip to Mars will be difficult. Only 40 percent of spacecraft that have tried to reach the red planet have made it. The United States is the only country to have successfully landed and operated spacecraft on Mars.

The first time was in 1976, with the Viking 1 and 2 spacecraft. The most recent landing was in 2012, by the Curiosity rover. A rover is a space exploration vehicle designed to move across the surface of a planet.

The InSight will use a parachute and engine firings to lower itself to Mars. Scientists predict it will take seven minutes for the spacecraft to enter the atmosphere of Mars and then land on the planet.

However, Banerdt says landing on Mars with a spacecraft that is not much bigger than two office desks will not be easy.

Digging deeper than ever before

Once on the surface, InSight will dig almost five meters into the planet's surface. At the same time, a robotic arm will place a scientific instrument that measure quakes on Mars' surface. It will detect the planet's vibrations. 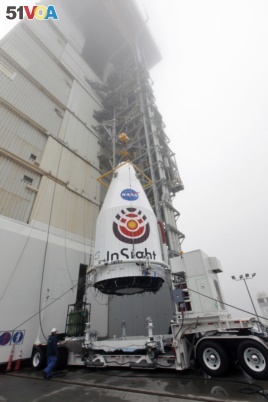 In this April 23, 2018 photo made available by NASA, a crane is used to lift NASA's InSight Mars lander for installation atop a United Launch Alliance Atlas V rocket at Vandenberg Air Force Base in California

InSight stands for "Interior Exploration using Seismic Investigations, Geodesy and Heat Transport." It weighs 694 kilograms. It has three legs, and will not be able to move around.

InSight's scientific mission is similar to NASA's Apollo program in the late 1960s and early 1970s. At that time, Apollo astronauts dug over two meters into the moon's surface so that scientists back home could measure the moon's underground flow of heat.

Earlier Mars missions have dug just below the surface to research the red planet's rocks, minerals, atmosphere and magnetic fields. But Banerdt says scientists have never examined any deeper into the surface.

"Mars is still a pretty mysterious planet," Banerdt said. "Even with all the studying that we've done, it could throw us a curveball."

Marcia Dunn reported this story for the Associated Press. Phil Dierking adapted her story for VOA Learning English. Ashley Thompson was the editor.

What do you think they will learn about Mars? Write to us in the Comments Section or on 51VOA.COM.

axis - n. the imaginary straight line that something (such as the Earth) turns around

briefcase - n. a flat case that is used for carrying papers or books

core - n. the central part of a fruit (such as an apple) that contains the seeds

curveball - n. a pitch that is thrown with spin so that the ball curves in the air

desk - n. a piece of furniture that is like a table and often has drawers

geological - adj. a science that studies rocks, layers of soil, etc., in order to learn about the history of the Earth and its life

spacecraft - n. a vehicle that is used for travel in outer space