Update Required To play the media you will need to either update your browser to a recent version or update your Flash plugin.
By George Grow
09 January, 2018


North and South Korea have held their first talks in more than two years.

North and South Korean officials met Tuesday in the border village of Panmunjom. They agreed to hold military talks in an effort to improve relations.

Officials in Seoul and Pyongyang were able to watch the meeting through a closed circuit television connection.

In a joint statement, the two sides said they have decided to "defuse the current military tension and to hold military talks to address the issue."

But North Korea says its nuclear weapons are not a subject for discussion with the South Korean government.

Ri Son Gwon led the North Korean delegation at the talks. He said, "All our weapons, including atomic bombs, hydrogen bombs and ballistic missiles, are only aimed at the United States, not our brethren, nor China and Russia."

Ri warned that to bring up the nuclear issue "would cause negative consequences and risks turning all of today's good achievement into nothing." Head of the North Korean delegation, Ri Son Gwon exchanges documents with South Korean counterpart Cho Myoung-gyon after their meeting at the truce village of Panmunjom

The North Korean official also announced that his country plans to take part in the 2018 Winter Olympics. The games are to be held next month in PyeongChang, South Korea.

Ri said that North Korea will send a delegation to the PyeongChang Olympics. The delegates are to include high-level government officials, Olympic athletes, cheerleaders, and a Taekwondo demonstration team.

Currently only two North Korean figure skaters have met international requirements for competing at the winter games. Although North Korea missed the closing date for countries sending a team to the games, the International Olympic Committee could still extend invitations to compete.

The South Korean government proposed that the Olympic teams from the two Koreas march together in the opening ceremony.

South Korea also proposed setting up talks to organize reunions of families separated since the Korean War. It said those discussions could take place during the Olympics, around Lunar New Year's holiday.

South Korean officials also proposed military talks with North Korea. They noted the need to negotiate a nuclear weapons deal with the North to bring peace to the Korean peninsula.

Talks between the two sides about the Olympics already succeeded in reopening direct contacts between North and South Korea. Communication links were cut in early 2016 after a North Korean nuclear test and rocket launch.

Since taking office in May of 2017, South Korean President Moon Jae-in has tried to re-establish contacts with North Korea. But he also has supported strong sanctions against the North as punishment for developing nuclear weapons and ballistic missiles. 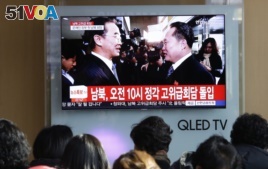 The United States has expressed guarded support for the discussions between North and South Korea. The U.S. government agreed to postpone joint military exercises with South Korea until after the Olympic Games.

In the past, U.S. President Donald Trump described negotiations with the North Korean government as useless. But this week, he called the new talks "a good thing" that came as a result of a "firm, strong" position. Trump also said that the U.S. would get involved in the negotiations "at the appropriate time."

But the State Department has voiced concern that North Korea might try to break up the alliance between the U.S. and South Korea. And it said the North might weaken U.S.-led efforts to force North Korea to give up its missile development program.

On Tuesday, Japan's Chief Cabinet Secretary Yoshihide Suga welcomed North Korean interest in joining the Pyeongchang Games. Yet he also said the North's nuclear program remains a serious international threat and that the U.N. sanctions imposed on Pyongyang must continue.

Brian Padden reported this story for VOANews. George Grow adapted his story for Learning English. His report contains information from the Associated Press and Reuters news agency. Hai Do was the editor.

address – v. to communicate directly with or to

closed-circuit – adj. of or involving a television broadcast in which the signal is directed at a limited number of receivers

brethren – n. members of an organization, usually a religious group

consequence – n. a result or product of something

achievement – n. success; the act of doing something

athlete – n. a person who is skilled in physical exercises or sports

appropriate – adj. right for some situation or purpose