Russian Insider: Putin Does Not Expect Reset with the West

Update Required To play the media you will need to either update your browser to a recent version or update your Flash plugin.
By George Grow
22 March, 2018


In 2003, the United States military launched an operation against forces loyal to Iraqi leader Saddam Hussein.

Russian officials raised objections and offered arguments against the invasion of Iraq. "But even though we disapproved, we didn't leak what Rice told us, or what was planned," a government insider noted.

The insider said the discussions show how tense relations between the two sides are now. His comments came after Britain accused the Russian government of approving the poisoning of a former Russian spy and his daughter in Britain.

The insider said Russian leader Vladimir Putin now believes relations between Russia and the West are permanently damaged and cannot be repaired.

"Back then in 2003, even though relations between us were strained, there remained a level of trust," the insider said. "There is none now — there is zero trust between Russia and the West." He rejected the British claims of the Russian leadership approving a nerve-agent attack on former spy Sergei Skripal.

The Russian insider spoke to VOA on the condition that his name not be used in this report.

The man occupied a leadership position in the government of former Russian President Boris Yeltsin. He then became an important member of the team of Russian President Vladimir Putin. He remains connected to the Russian government, but no longer has an official position. 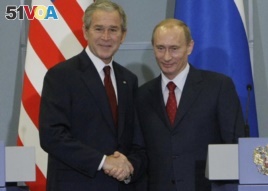 Disagreements between Russia and the West

The insider does not expect an improvement in relations between his country and the West any time soon. His comments are like those of the Russian president. They suggest that any attempt to reset ties is unlikely during Putin's next term in office.

"He (Putin) doesn't think it is possible and he has given up trying," the insider said. He pointed to the expansion of NATO to parts of the former Soviet Union as a critical event in the relationship. Estonia, Latvia and Lithuania all joined the alliance in 2004.

Another major event, he said, came with Western objections to Russia establishing closer ties with other former Soviet republics. This led to a face-to-face argument between Putin and Condoleezza Rice during a 2006 meeting.

By that time, Rice was the U.S. Secretary of State. She told Putin the former Soviet republics were now independent states and should make their own decisions without what she saw as Russian threats.

Then came the political unrest in Ukraine in late 2013 and early 2014. It led to the ouster of the country's president, Viktor Yanukovych, a Putin ally.

Russian officials blame western governments for inciting what is now called the Maidan unrest. They deny those protests were a popular uprising against Yanukovych.

"Now what?" the Russian insider asked. "The Ukraine problem won't be solved for a century, the conflict in the Donbas region will remain frozen and Crimea will remain Russian. And so are we going to remain hostile to each other — two nuclear-armed nations with their missiles pointed at each other? That is very dangerous," he said. 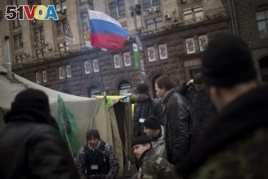 A Russian flag waves on a tent set by anti-Yanukovych protesters in Kiev's Independence Square, the epicenter of the country's current unrest, Ukraine, Saturday, March 1, 2014.

A return to the Cold War?

Russian officials blame the West for the worsening relationship. They are comparing it to the Cold War when western countries were competing against the Soviet Union and its allies.

Officials say the return to Cold War-like relations and the sense of pessimism show just how difficult it will be to repair ties. They say the United States and Europe are likely to remain unfriendly as Russia reacts to what it sees as a U.S.-led plot to limit its influence.

For example, Russia is active in Syria and has tried to influence events in the Middle East.

"Some people in the Kremlin hoped it would be different with [U.S. President] Donald Trump. But I wasn't holding my breath," the insider said.

Earlier this week, Britain's Daily Telegraph newspaper published an opinion piece by British Foreign Secretary Boris Johnson. He wrote about the Skripal poisoning. Johnson described the nerve-agent attack in Salisbury, England as one in a long line of hostile Russian acts towards the West.

On Monday, European Union foreign ministers expressed their support of Britain over the nerve-agent attack. They called on Russia to provide urgent answers to questions raised by the British government. The ministers stopped short of backing Britain's claim that Russia was responsible for the attack.

However, they said took the British findings "extremely seriously."

Among other aggressive behavior, say Western officials, is Russian involvement in Western politics and elections, such as the 2016 U.S. presidential election. They point to Russian financing and support of populist parties and increasing use of social media campaigns as part of an effort to weaken the European Union.

On March 15, the Trump administration blamed Russian agents for carrying out a series of attacks on computers and computer systems. They say these cyber attackers targeted American and European nuclear power stations and other utility infrastructure.

though – adj. short for although

strained – adj. involving or related to stretching or pulling something

pessimism – n. a belief that bad things will happen in the future

Kremlin – n. the name for the headquarters of the Russian government

utility – adj. of or involving a public service, such as lighting, power or water

infrastructure – n. the system of public works (workers, buildings or equipment) for a country