Update Required To play the media you will need to either update your browser to a recent version or update your Flash plugin.
By Bryan Lynn
02 August 2020


Researchers are testing a fungus known to grow in high radiation environments to see if it could possibly protect humans traveling in space.

One fungus being studied survived – even thrived – in areas around the former Chernobyl nuclear power center in Ukraine. In 1986, a reactor there exploded and caught fire, sending huge amounts of radiation into the air.

Chernobyl was the world's worst nuclear disaster. The accident caused widespread harm to people and other living things in the surrounding area. Several kinds of fungi, however, have continued to experience growth within the highly radioactive environment.

Researchers are studying a substance found within some fungi called melanin. It is a pigment that gives skin, hair and eyes their color. Studies have shown that melanin in the cell walls of some fungi can take in radiation and turn it into chemical energy.

Recently, a report about one kind of melanin-containing fungus was published on the internet in "pre-print" form. This means the research has yet to complete a peer review process. 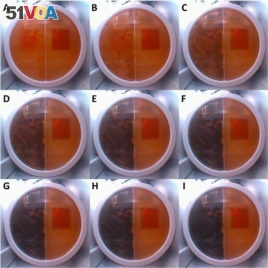 This photo shows the progression of fungus growth measured by the researchers in samples sent to the International Space Station. (Image Credit: BioRxiv)

The study is a project of scientists from the University of North Carolina and California's Stanford University. The scientists reported that the fungus, called Cladosporium sphaerospermum, was sent to the International Space Station - ISS - for testing.

Earth's atmosphere and magnetic shield protect us from extreme radiation found throughout the universe. But the U.S. space agency NASA notes that while the ISS sits within Earth's magnetic field, astronauts receive over 10 times the radiation that we receive on Earth. It warns that space travelers spending long periods in places like the moon or Mars will face high levels of harmful radiation.

The researchers say the melanin-containing fungus that thrives in Chernobyl could be used to create protective shields for future astronauts.

In the report, the researchers said growth of the fungus on the ISS was observed for 30 days. Radiation levels were also measured. During the test period, the measured radiation levels decreased "by at least 1.82 percent and potentially up to 5.04 percent," the report said.

The researchers said that the experiment demonstrated "that the fungus not only adapts to, but thrives on and shields against space radiation." They noted that since the fungus reproduces itself in high-radiation environments, small amounts could be transported to space and then grown in large amounts.

Last year, researchers from Johns Hopkins University said they had shipped melanin from a similar fungus, called Cryptococcus neoformans, to the ISS. This fungus lives in environments across the world and was found thriving in the area around Chernobyl.

One of the researchers on that project is Radamés J.B. Cordero, with the Johns Hopkins Bloomberg School of Public Health.

Cordero said in a statement that the goal of the ISS research is to see how melanin from the fungus can protect astronauts and equipment in space. But he added that radiation is also a big concern for health care providers and patients who are exposed to the material during medical treatments.

"If you have a material that can act as a shield against radiation, it could not only protect people and structures in space, but also have very real benefits for people here on Earth," he said.

Bryan Lynn wrote this story for VOA Learning English, based on reports from BioRxiv, Johns Hopkins University and the CDC. George Grow was the editor.

fungus – n. a type of plant without leaves that gets its food from other living or decaying things

pigment – n. a substance that gives something color

peer – adj. someone holding the same position or social standing as other member of a group

review – n. the process of considering something to decide whether to make changes to it

shield – n. something used as protection against harmful things

potential – adj. having the possibility to do something

adapt – v. to change behavior to fit a new situation

expose – v. subject to risk from a harmful action or condition

benefit – n. something that helps you or gives you an advantage