Update Required To play the media you will need to either update your browser to a recent version or update your Flash plugin.
By John Russell
10 June 2020


Around 110 million years ago, a dinosaur ate some plants, in what is now western Canada, before suddenly dying.

That creature is now giving important information about ancient plant-eating dinosaurs. Scientists reported recently that fossilized contents of the creature's stomach were found along with its skeleton.

The fossils were discovered in the Canadian province of Alberta. They are said to be the best-preserved remains of any plant-eating dinosaur. The stomach contents even show the cellular structure of leaves from the plants the dinosaur ate. 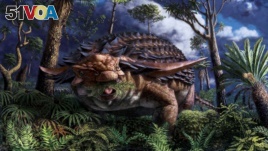 The armoured dinosaur Borealopelta markmitchelli, which lived 110 million years ago in what is now the Canadian province of Alberta, eats ferns in an illustration released on June 2, 2020. (Royal Tyrrell Museum of Palaeontology/Julius Csotonyi/Handout via REUTERS)

Caleb Brown is a paleontologist at the Royal Tyrell Museum of Paleontology in Alberta. He was the lead writer of a research report that appears in the online publication Royal Society Open Science.

Brown noted that direct evidence of the diet of plant-eating dinosaurs "is very rare."

The creature was about 5.5 meters long, weighed at least a ton and was a member of a group called nodosaurs. Its name is Borealopelta markmitchelli.

It had a wide body and a small head. Its body had bony skin and a large spike on each shoulder.

The creature's stomach had leaves from a kind of fern, as well as very few leaves of different kinds of evergreens. Charcoal, a black material left after things are burned, was also found in its stomach. To researchers, that finding suggests the dinosaur had been eating in an area that had recently had a fire.

Scientists also reported finding many gastroliths, or gizzard stones. These are objects swallowed by modern birds and other animals to help the stomach break down food.

Will Dunham reported on this story for the Reuters news agency. John Russell adapted it for VOA Learning English. George Grow was the editor.

dinosaur – n. one of many reptiles that lived on Earth millions of years ago

fossilized – adj. involving the remains of an ancient animal or plant

contents – n. the things that are in something

paleontologist – n. a scientist who studies life on Earth through fossilized remains

spike – n. a long, thin object that ends in a point

fern – n. a plant that has large, soft leaves and no flowers

evergreen – n. a plant that has leaves that remain green all year long