UN: Over One Million South Sudan Refugees in Uganda

Update Required To play the media you will need to either update your browser to a recent version or update your Flash plugin.
By George Grow
17 August, 2017


The United Nations says over one million people have entered Uganda to escape violence in neighboring South Sudan.

The U.N.'s refugee agency reported Thursday that an average of 1,800 South Sudanese arrived daily in Uganda over the past year. One million others are reported to have gone to Sudan, Ethiopia, Kenya, the Democratic Republic of Congo and the Central African Republic.

Recent arrivals to refugee camps have reported "barbaric violence" in their home country. They say South Sudanese civilians are being burned alive in their homes. They report of sexual attacks on women and girls, and kidnapping of boys who are then forced into armed groups. 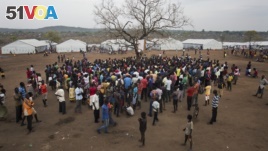 South Sudanese refugees at the Imvepi camp in Uganda gather under a tree. The civil war in South Sudan has killed tens of thousands and driven many thousands from their homes. (AP Photo/Jerome Delay)

South Sudan's civil war began at the end of 2013. Aid agencies say there has been increasing violence since a power-sharing agreement collapsed in July of last year. Civilians have suffered the most in the conflict.

The International Committee of the Red Cross says one in three people living in South Sudan has been displaced. It also says one in two South Sudanese is severely hungry and in need of food assistance.

The New York-based group International Rescue Committee, or IRC, reports that 75 percent of the South Sudanese refugees in Uganda have arrived in the past year.

Amnesty International has called the one-million mark a "wake-up call" for the international community. The group says other countries must act to stop violence and other abuses against civilians in South Sudan.

The United Nations has estimated it will need $674 million this year alone to provide for the refugees, but the U.N. says it has received only 20 percent of that amount. The lack of money has forced the World Food Program to cut food supplies for some refugees. Classes have also been affected in the few schools available. Some classes often have as many as 200 students.

South Sudanese families continue to arrive, exhausted, in Uganda. Armed rebels keep a close watch on the South Sudanese side of the border as the people cross. The most recent arrivals have suffered through heavy rain, cold nights and the sun's heat to find safety.

Once on the Ugandan side, Lacey Iya and her family stopped to rest.

She says they stayed three weeks under trees, with only simple cooking equipment, plates and drinking glasses. She says they need to be taken to a place to find peace, and leave what happened behind them.

George Grow wrote this story for Learning English. Caty Weaver was the editor.

wake-up – adj. helping someone or something to awaken

plate – n. a flat, usually round object that is used for serving food