Update Required To play the media you will need to either update your browser to a recent version or update your Flash plugin.
By Bryan Lynn
27 May 2020


SpaceX is making history by aiming to be the first private company to launch American astronauts into orbit. But the company is breaking new ground in other ways, too. It has designed a completely new style, or look, for its astronauts and spaceship.

The space suits for NASA astronauts Robert Behnken and Douglas Hurley appear much thinner than traditional designs from the past. The smooth suits are mostly white with some gray. They look similar to futuristic clothing shown in many science fiction movies. The helmets -- also white -- have a narrower shape than the past.

SpaceX founder Elon Musk was the driving force behind the designs. Musk, who also heads electronic carmaker Tesla, is a big science fiction fan. He is known for his colorful product launches. He came up with the idea to have the two astronauts get a ride to the launch pad at Florida's Cape Canaveral Air Force Station in a Tesla Model X sports car. 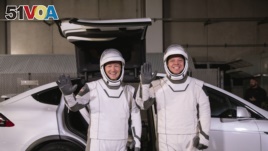 Behnken and Hurley aim to be the first astronauts to launch from American soil since the last space shuttle flight in 2011. They say they like the fresh new look of the suits and space capsule.

"It is really neat, and I think the biggest testament to that is my 10-year-old son telling me how cool I am now," Hurley told The Associated Press.

The inside of the capsule is also mostly white and minimal, with large seats facing the spacecraft's displays and controls.

"SpaceX has gone all out" on the capsule's appearance, Hurley added. "And they've worked equally as hard to make the innards and the displays and everything else in the vehicle work to perfection."

The designs demonstrate the historic new direction NASA is taking as it partners with private American companies to develop U.S. spaceflight systems. Until now, only governments – including the United States, Russia and China – have sent astronauts into orbit.

SpaceX's Crew Dragon spacecraft, carried by a Falcon 9 rocket, will carry the astronauts. Musk named the rocket after the famous Millennium Falcon spacecraft from Star Wars.

SpaceX designed and built its own suits, which were made to perfectly fit each individual astronaut, said SpaceX's Benji Reed. He said safety came first in the design and manufacturing. But their cool look was a close second. "It's important that the suits are comfortable and also are inspiring," Reed said. "But above all, it's designed to keep the crew safe," he added.

Even with all the modern extras, the two astronauts prepared for the launch inside the same Kennedy Space Center building that dates back to space flights from the 1960s.

Bryan Lynn wrote this story based on reports from The Associated Press, NASA and SpaceX. Ashley Thompson was the editor.

break new ground – phr. do something that is different from anything that has been done before

helmet – n. a hard hat that protects the head

testament – n. proof of something good

innards – n. the inside part of a machine