Student Activist: 'We Are Going to Make a Serious Difference'

Update Required To play the media you will need to either update your browser to a recent version or update your Flash plugin.
By VOA
25 February, 2018


The recent school shooting at Marjory Stoneman Douglas High School in Parkland, Florida, claimed the lives of 17 students and teachers. It also started a wave of protests among young people across the country.

These student activists are calling for stronger gun laws in America. They have held demonstrations and gone on day strikes from school. They have spoken on television, used social media to spread their message and met with President Donald Trump and other elected officials.

Sofia Hidalgo is one of those students. She is 15 years old and a student at Albert Einstein High School in the state of Maryland. She sat down with VOA Learning English's Bryan Lynn to discuss her generation's new sense of activism following the Parkland shooting. 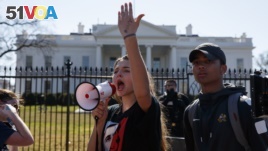 Bryan: First of all, [if] I could get you just to say your name and your school and what you've been up to for the past week?

Sofia: My name is Sofia Hidalgo. I go to Albert Einstein High School, and this week we have participated...in a school walkout on Wednesday to march for the need of gun control.

Bryan: So, with all of this activism that now seems to be coming out and driven in large part by students and young people, what do you think trigger that?

Sofia: I think specifically because the Florida shooting was in a school, that triggered the activism in other students in high schools around the country...realizing that this happened at that school [and] it could happen at my school, as well. So I think that once we realized that this could happen to us, as well, that it was time for us to make our voices heard to ensure that it never happens again, because this is a serious tragedy.

Bryan: And there have been a lot of school shootings in the past, unfortunately. Why was this one different, and specifically with you, how did this one affect you different from the other ones that have happened?

Sofia: Well the other school shootings in the past, I was a lot younger. It happened before I had gotten into politics, into activism. I had started getting involved when we did a school walkout when Trump won the presidency. And my school and the schools around me did a massive school walkout for that. And then the women's march. And those two -- that walkout and that march -- is what triggered me and the people in my community, as well, to start being active.

...Especially when we are younger, parents seemed to sugarcoat things that are going on. I know that I never used to watch the news and I did not have a Twitter before and I did not have a Facebook before. So I didn't see anything expect for mere rumors of ‘oh a shooting happened' but then that was it. And it was definitely sugarcoated by adults. And so now that I have social media and now that I was a big part in the women's march and was very active in the school walkout...I understand more about what had happened.

Bryan: Have you personally felt unsafe in your own school?

Sofia: Sometimes. I think about it, but we actually have armed police at our school as a lot of other schools in this area...I trust my community and I trust the policeman and we also always have drills once a month of what to do in serious situations. So I know what I need to be doing and how to stay safe in those situations.

Bryan: One of the proposals that has come up from the administration is to arm teachers, to try to prevent mass shootings like this. What's your feeling on that?

Sofia: Well, I think that proposed solution is an excuse to give more money to the NRA [National Rifle Association]. By arming the teachers you're just distributing even more guns. And this is not the solution that we need. We need to be restricting the sale of guns not increasing them. And by arming the teachers you're trying fight fire with fire and that's not a solution. That is maybe a temporary one, but you need to attack the problems at the root and not build on top of it, and by arming teachers you're just simply building on top of a problem. And the teachers are not there to defend the lives of us...they're there to teach and we're there to learn.

We're not there to expect that it's going to be our last day. We're there to say ‘I'm going to come here in the morning, I'm going to learn, I'm going to go home and do my homework and do it again tomorrow.' Not [think] ‘what if today there's a school shooter and my teacher needs to pull out their gun?'

Bryan: And at your school do they do any metal detectors or anything like that?

Sofia: No. Not at my school. [I] heard an argument once that was talking about their school that had a metal detector and they said, like, ‘why do we have new metal detectors and old school books from like the 1990s; that we should be putting more of the money into the arts and into our textbooks and into getting us access to computers than we should into arming the teachers or arming the people at our school or trying to like claim that the kids are carrying illegal things with them. We need to be funding the schools and not funding, like, giving more money to the NRA.

Bryan: There's been a lot of talk over the years about gun control and, you know, there are very strong sides in the U.S. on both sides of the issue, obviously. And there's a lot of money involved and lobbying and all of that kind of stuff. What do you hope to accomplish -- you and other students, other friends of yours -- through these marches, and the activism that's coming up now? Even though this has taken place in the past, do you think it's a different time now?

Sofia: By these marches, we're hoping to accomplish, like, a change in mentality, so that people realize that we do have a voice, and even though we cannot vote yet, that we're going to still - that we're going to keep pushing so that people who do vote, can vote in a way that will protect all of us when we grow up. And that they understand that my generation is pushing really hard, and that when we are able to vote that things are definitely going to be changing.

My generation is incredibly active and even though we cannot vote yet, when we can we are going to make a serious difference.

Bryan: Well thanks so much for coming to Learning English. Good luck with your efforts from here.