The US Capitol Attack: More Troubling than It First Appeared

Update Required To play the media you will need to either update your browser to a recent version or update your Flash plugin.
By Susan Shand
11 January 2021


Carrying flags showing the name of President Donald Trump, the Capitol's attackers are accused of killing one police officer and injuring many others.

"Hang Mike Pence!" they cried as they pushed inside. They had built gallows outside, complete with a tied rope. Guns and small explosives were hidden nearby.

Now, more stories are beginning to describe what really happened last week when attackers breached the Capitol. They were looking for the vice president and House Speaker Nancy Pelosi.

They were not just a group of Trump supporters wearing MAGA hats. MAGA stands for Make America Great Again and is a favorite Trump statement.

Congressman Jim McGovern described how he saw the crowd.

"What I saw in front of me," he said, "was basically home-grown fascism, out of control."

Pelosi said Sunday on American television that the breach was "a well-planned, organized group with leadership and guidance and direction."

Smartphone videos are being found, many from the attackers themselves, and lawmakers are telling their stories. 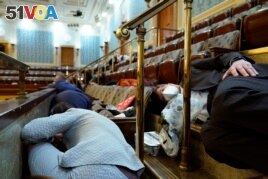 People shelter in the House gallery as protesters try to break into the House Chamber at the U.S. Capitol on Wednesday, Jan. 6, 2021, in Washington. (AP Photo/Andrew Harnik)

Thousands of attackers had moved into the area. They quickly pushed through the outnumbered police.

At about 2 p.m., Pence was taken from the Senate to a secret area. Police announced security measures in the Capitol building, which is often called the "People's House."

Capitol Police pulled Pelosi away from her podium, she told American television.

At 2:44 p.m., lawmakers inside the House chamber were getting ready to be leave. They heard the gunshot that killed Ashli Babbit, as she climbed through a broken window.

Ten minutes later, House lawmakers and employees were taken to a secure room. The attackers broke into Pelosi's offices while her employees hid in another room. They sat silent, in the dark for more than two hours.

On the Senate side, Capitol Police had ordered all workers and reporters and any nearby senators into the Senate chamber and locked it. At one point about 200 people were inside. They were guarded by an officer holding what appeared to be large guns.

Officials then moved everyone out of the chamber and into a secure room. The Senate employees held onto boxes holding the Electoral College papers. The attackers breached the now empty Senate chamber. They took pictures and videos of themselves.

Outside the chamber, the attackers continued to search for lawmakers. "Where are they?" people could be heard yelling.

At about 5:30 p.m., the National Guard arrived and an effort began to clear the building. Using tear gas, they pushed the attackers out of the building and on to the grass.

Within the hour, the House and Senate had returned to work. Lawmakers confirmed Biden's election victory early the next morning. Many were still shocked by the events.

Federal and local police now have begun arresting those involved in the breach. More arrests are expected as police look at videos and pictures on social media. The justice department has charged at least 13 people so far. Others have been charged by the District of Columbia. Some face gun charges.

Those arrested include Jake Angeli. He wore a fur hat with horns. He has attended many Trump events and is a well-known believer in conspiracies.

Adam Johnson was photographed smiling as he took Pelosi's lectern. Richard Barnett was photographed with his feet on Pelosi's desk. Eric Munchel was photographed in military clothing holding plastic restraints in the Senate Chamber. And Derrick Evans, a newly-elected member of the West Virginia House of Delegates, also was arrested. He has since resigned.

The Associated Press reported this story. Susan Shand adapted it for Learning English with additional information from the New York Times. Mario Ritter, Jr. was the editor.

gallows –n. (pl.) a structure from which people are hanged

breach –v. to get into a secured or secret place

fascism -–n. a way of organizing society in which a government is ruled by a dictator; very harsh authority

barricade –v. to block people into a place so no one can get in and no one can leave

podium –n. a raised structure for a speaker or a performer

chamber –n. a large room where members of a government group have meetings

conspiracy –n. a secret plan by two or more people to do something harmful or illegal

lectern –n. a small structure that holds books or papers which can be used for speaking