Trump in Davos: ‘America First’ Does Not Mean ‘America Alone’

Update Required To play the media you will need to either update your browser to a recent version or update your Flash plugin.
By Bryan Lynn
26 January, 2018

But he said although his policies seek to put America first, this "does not mean America alone."

"When the United States grows, so does the world," Trump said. He added that U.S. economic growth, creativity and innovation has led to the creation of "countless jobs around the globe."

The World Economic Forum is a not-for-profit organization established in 1971. The yearly meeting is attended by world political and business leaders, including many heads of state.

Trump's comments about his ‘America First' policies were expected at the gathering. But some experts were unsure how the theme would be received: the Davos meeting traditionally centers on global economic growth. 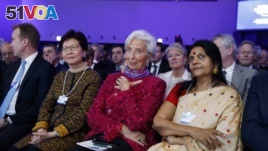 Trump said the U.S. economy had improved during his first year in office. He pointed to the creation of 2.4 million jobs, dropping unemployment rates and record highs in the stock market. This growth, Trump said, had created a great chance for global investment in America.

"I'm here to deliver a simple message: There has never been a better time to hire, to build, to invest and to grow in the United States. America is open for business and we are competitive once again."

However, Trump said he believes the current international trading system is unfair. He said it does not reward nations that "play by the rules."

"We cannot have free and open trade if some countries exploit the system at the expense of others. We support free trade, but it needs to be fair, and it needs to be reciprocal. Because in the end, unfair trade undermines us all."

Trump also spoke about the Trans-Pacific Partnership free trade agreement. The U.S. president said he is willing to negotiate trade deals individually or as a group with nations in that agreement.

Last year, Trump withdrew the U.S. from the Trans-Pacific Partnership, which includes 11 Pacific area nations. Trump said the U.S. already has agreements with several member nations. He added that the U.S. would consider negotiating with others, as long as "it is in all of our interests."

Before his trip to Davos, Trump signed an executive order that placed import taxes on washing machines and solar panels. The order calls for a 30 percent tax on imported solar panels.

While at the Davos meeting, Trump also held talks with the leaders of Britain, Israel, Switzerland and Rwanda.

theme – n. the main subject or issue that is discussed often or repeatedly

hire – v. begin to employ someone

reciprocal – adj. used to describe a relationship in which two people or groups agree to do something similar for each other

solar panel – n. a large, flat piece of equipment that uses light from the sun to create electricity