Update Required To play the media you will need to either update your browser to a recent version or update your Flash plugin.
By Nancy Steinbach
2011-6-26 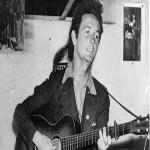 Photo: loc.gov
Woody Guthrie sang songs describing the conditions at the farm worker camps that he was visited

BARBARA KLEIN: Welcome to THIS IS AMERICA in VOA Special English. I'm Barbara Klein. This week on our program, we explore American folk music, the music of the people.

"Good Night Irene," is an example of a traditional folk song. That means the song is so old, no one really knows who wrote it. 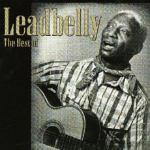 Folk music researcher Bob Carlin notes the historic importance of protest songs. They help give voice to cultural and social movements, he says.

One of the members of the Weavers was Pete Seeger. He was among those who popularized folk music in the nineteen forties. Later, he wrote some of the best known songs of the civil rights and anti-Vietnam War protests of the sixties.

Pete Seeger could be called the King of the Protest Song, in the words of folk musician Tony Trischka. Yet his greatest influence may have come from popularizing a song that he himself did not write. "We Shall Overcome" came from a Negro spiritual. 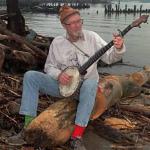 As Tony Trischka points out, the original version was called "We Will Overcome." Pete Seeger thought "shall" sounded better. And he made other changes, like adding the verse "we are not afraid" to offer support for the protests taking place across the country.

"We Shall Overcome," became the theme song of the American civil rights movement.

Folk songs sometimes tell stories about real events. An example is the story of a young man whose last name was spelled D-U-L-A but pronounced "Dooley."

Tom Dula was a Civil War veteran in North Carolina. He was tried and found guilty of the murder of his girlfriend Laura Foster. He was hanged in eighteen sixty-eight, yet the case left many questions.

The story was retold in poems and songs -- including the hit song, "Tom Dooley," recorded in nineteen fifty-eight by the Kingston Trio.

Folk singer and songwriter Amy Speace says the history of American folk music can be imagined as a tree with many branches. At the center, she says, is Woody Guthrie.

Woody Guthrie wrote almost three thousand songs. But he only recorded about three hundred of them. His granddaughter Anna Canoni says that was partly because he did not have enough money to record more. He made only one record with a major record company.

Yet for all his influence, millions of Americans today remember him for just one song, which children learn in school.

The song, "This Land Is Your Land," seems like the perfect expression of pride in country. What many people do not know is that it was meant sarcastically, as just the opposite. Woody Guthrie wrote it in nineteen forty in reaction to Irving Berlin's popular song, "God Bless America."

In fact, Woody Guthrie first called his song, "God Blessed America for Me." It was meant as a protest song against private property and the unequal treatment of citizens.

This meaning is made clear later in the song, in the parts that most children never learn in school:

Another verse talks about seeing hungry people standing in line for public aid at the relief office. Woody Guthrie was a voice for labor unions and striking workers and families beaten down by the Great Depression in the nineteen thirties. Joan Baez and Bob Dylan perform at the Newport Jazz Festival in Newport, Rhode Island, in 1963

In the nineteen sixties, folk singers like Joan Baez and Bob Dylan protested the Vietnam War. Bob Dylan's, "Blowin' in the Wind," became a big hit for the folk group Peter, Paul and Mary in nineteen sixty-three.

Singer and songwriter Amy Speace says there are still protest songs being written. She points to the examples of Steve Earle and Neil Young as well as what she calls more contemporary folkies. 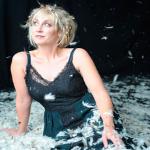 That would include herself, a child of the eighties. Amy Speace describes one of her songs as a protest song, but more of a story with the protest quietly built into it. The story is about a girl whose brother is a soldier who gets killed in a desert war.

The song is called, "The Weight of the World."

A new kind of folk music mixes elements of traditional folk and rock with mostly acoustic instruments. Some call it "freak folk." Others hate that name. 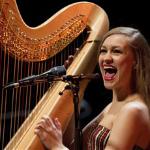 Joanna Newsom at her concert at the Belem Cultural Center in Lisbon, Portugal earlier this year

Whatever you call it, one artist often used as an example is the singer, songwriter and harp player Joanna Newsom. This song is called, "Sprout and the Bean."

Some people probably think of a folk singer as a fossil from the nineteen sixties. A long-haired, guitar-playing idealist who sings about bringing the world together.

But these days, with music production software, digital video and social networks all easily available, folk artists really can bring the world together.

Our program was written by Nancy Steinbach and produced by Caty Weaver. I'm Barbara Klein. Join us again next week for THIS IS AMERICA in VOA Special English.