Update Required To play the media you will need to either update your browser to a recent version or update your Flash plugin.
By Sarah Randle
2010-6-5

BARBARA KLEIN: And I'm Barbara Klein with PEOPLE IN AMERICA in VOA Special English. Today we tell about the life and writings of Ayn Rand.

STEVE EMBER: Although she died more than twenty-five years ago, many Americans still argue about Ayn Rand. More than twenty million copies of her books have been sold around the world. Many people say her books are poorly written. But people still buy hundreds of thousands of copies of them each year. People also continue to talk about her ideas and her interesting life.

BARBARA KLEIN: In nineteen-oh-five, Alisa Rosenbaum was born in the Russian city of Saint Petersburg. As a young child, Alisa loved books. She began to write her own stories when she was only seven years old.

When the Russian Revolution began in nineteen seventeen, the Rosenbaum family fled to the Russian state of Crimea. This experience was important in Alisa's life. It started her hatred of collectivism. Collectivism is the system of ownership and control of the means of production by the people collectively, usually under the supervision of a government.

After the revolution, Alisa returned to Saint Petersburg, now called Petrograd, to attend college. She took classes in politics, history, law, and writing. In nineteen twenty-six, she traveled to the United States to visit family members.

STEVE EMBER: Soon after she arrived in the United States, Alisa decided she would never leave. She also decided to change her name to "Ayn Rand." She said "Rand" was taken from the Russian alphabet spelling of "Rosenbaum." She said she chose "Ayn" after the name of a writer from Finland.

Newly named, Rand moved to Hollywood, California to work in the movie business. She met and married actor Frank O'Connor in nineteen twenty-nine. Throughout the nineteen thirties, O'Connor acted and Rand wrote. She published two books during these years, but did not earn much critical or popular recognition.

Rand's famous book "The Fountainhead" was published in nineteen forty-three.

BARBARA KLEIN: Then, in nineteen forty-three, Rand's famous book "The Fountainhead" was published. It took her seven years to write the novel. Twelve publishers rejected the book. However, a man named Archibald Ogden loved the story and convinced the Bobbs-Merrill company to publish it. "The Fountainhead" became a huge success around the world. It has sold more than six million copies. It continues to sell about one hundred thousand copies each year.

"The Fountainhead" tells the story of a young building designer named Howard Roark. Roark wants to build interesting, modern-looking buildings. However, most people only want to see traditional designs. Roark loves designing and building more than anything in the world. But he refuses to compromise and make buildings he hates. Several people work against Roark and his goals. But in the end, Roark succeeds.

"The Fountainhead" is an unusual novel for many reasons. It is more than seven hundred pages long, far longer than most books people read for entertainment. It also includes discussions of philosophy, which are not usually found in popular books. In addition, the book criticizes collectivism and religion in a way that many people have found insulting.

Most critics did not like "The Fountainhead." But readers loved it. In nineteen forty-nine it was made into a popular movie. Rand wrote the screenplay. Gary Cooper and Patricia Neal starred in the movie.

STEVE EMBER: After the movie was released, Ayn Rand and Frank O'Connor moved to New York City. They started having weekly meetings for friends in their apartment. Soon, the gatherings became more serious. The members discussed philosophical ideas and began writing about them. The group decided to call itself "the Collective." The name was meant to be a joke, because all of the members hated collectivism. Alan Greenspan, who would later become chairman of the Federal Reserve, was part of this group.

The Collective worked together to form the details of Rand's philosophy, which they called "Objectivism." Objectivism is about the importance of the individual and reasonable thought. Rand believed that people must choose their values and actions through reason. She believed that the individual has a right to exist for his or her own self. The Collective also helped Rand edit her book "Atlas Shrugged," which was published in nineteen fifty-seven.

BARBARA KLEIN: "Atlas Shrugged" is set in the near future. The American economy and society are starting to collapse under the influence of big government. The United States is a nation of failing businesses, closed factories and angry citizens.

A small group of thinkers, artists, scientists and industrial leaders disappears from society. They flee to a hidden valley in Colorado. Here they establish a new community based on capitalism without government control.

The heroine of the book is Dagny Taggart who owns a large railroad company. She struggles to keep her business alive and save the country while society is collapsing around her. "Atlas Shrugged" is more than one thousand pages, one of the longest novels ever written.

Ayn Rand said that "Atlas Shrugged" fully defined her philosophy of Objectivism. She wrote at the end of the book: "My philosophy... is the concept of man as a heroic being, with his own happiness as the moral purpose of his life, with productive achievement as his noblest activity, and reason as his only absolute." 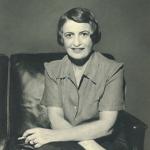 Ayn Rand is still one of the most loved, and hated, American thinkers.

STEVE EMBER: Rand thought "Atlas Shrugged" was the most important book ever written. The critics did not agree. Most gave the book bad reviews. In the National Review, a conservative political magazine, Whittaker Chambers wrote a long, angry article about "Atlas Shrugged." He said it was a stupid book with dangerous ideas.

As with "The Fountainhead," the public disagreed with the critics. "Atlas Shrugged" went on to sell millions of copies around the world. Ayn Rand and her ideas quickly became well known, especially among students and other young people. Later, she wrote books about economics, politics, love and other subjects.

BARBARA KLEIN: One young person became interested in Ayn Rand's ideas long before "Atlas Shrugged" was published. His name was Nathaniel Branden. After reading "The Fountainhead," he wrote a letter to Rand. He wrote that he wanted to discuss the relationship between psychology and Rand's ideas. Branden and his wife Barbara soon became friends with Rand and joined the Collective. Rand and Branden began to have a sexual relationship even though they were married to other people.

They called themselves the experts on all of the ideas of Objectivism. They wrote many papers and made speeches all over the United States. However, some people criticized the Objectivists and their followers.

They said people honored Rand and Branden as if they were religious leaders without ever questioning their beliefs. Rand rejected this criticism. She wrote that "a blind follower is ...what my philosophy condemns and what I reject. Objectivism is not a mystic cult."

Things changed in nineteen sixty-eight when Rand discovered Branden having a sexual relationship with a younger student. Rand became very angry and forced Branden to leave the Objectivists and never speak to her again.

STEVE EMBER: After the end of her relationship with Branden, Ayn Rand's life slowed down. She lived quietly in New York City until she died in nineteen eighty-two. At her funeral, one of her followers left a gift. It was a two-meter tall flower arrangement in the shape of a dollar sign. This gift was meant to represent Rand's ideas about capitalism as the most moral economic system.

Ayn Rand's books continue to be extremely popular. "Atlas Shrugged" has been named in several opinion studies as one of the best and most influential books of the twentieth century. Reports from Hollywood, California say that several actors, writers and producers are working on a movie version of "Atlas Shrugged."However, many people are still opposed to Ayn Rand's books and ideas. More than one hundred years after her birth, Ayn Rand's books, thoughts, and actions continue to be important to many people. She is still one of the most loved, and hated, American thinkers.

STEVE EMBER: And I'm Steve Ember. You can find the text of our programs and download audio at 51voa.com. Join us again next week for PEOPLE IN AMERICA in VOA Special English.