Ida Tarbell, 1857-1944: She Used Her Reporting Skills Against One of the Most Powerful Companies in the World

Update Required To play the media you will need to either update your browser to a recent version or update your Flash plugin.
By Paul Thompson
2010-4-24 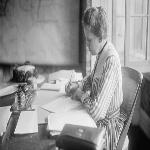 Photo: loc.gov
Ida Tarbell was one of the most successful magazine writers in the United States during the last century.

BOB DOUGHTY: People in America, a program in Special English on the Voice of America. Every week we tell about a person who was important in the history of the United States. Today Shirley Griffith and Ray Freeman tell about reporter Ida Minerva Tarbell.

Ida Tarbell was one of the most successful magazine writers in the United States during the last century. She wrote important stories at a time when women had few social or political rights.

SHIRLEY GRIFFITH: Ida Tarbell used her reporting skills against one of the most powerful companies in the world. That company was Standard Oil. Ida Tarbell charged that Standard Oil was using illegal methods to hurt or destroy smaller oil companies.

She investigated these illegal business dealings and wrote about them for a magazine called McClure's. The reports she wrote led to legal cases that continued all the way to the Supreme Court of the United States.

RAY FREEMAN: Ida Tarbell was born in the eastern state of Pennsylvania in November, eighteen fifty-seven. Her family did not have much money. Her father worked hard but had not been very successful.

When Ida was three years old, oil was discovered in the nearby town of Titusville. Her father entered the oil business. He struggled as a small businessman to compete with the large oil companies.

Ida's mother had been a school teacher. She made sure that Ida attended school. She also helped the young girl learn her school work.

Ida wanted to study science at college. Most people at that time thought it was not important for young women to learn anything more than to read and write. Most people thought educating women was a waste of money.

Ida's parents, however, believed education was important -- even for women. They sent her to Allegheny College in nearby Meadville, Pennsylvania. She was nineteen. 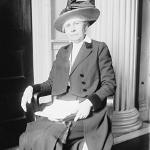 Ida Tarbell was one of the most successful magazine writers in the United States during the last century.

SHIRLEY GRIFFITH: Those who knew Ida Tarbell in college say she would wake up at four o'clock in the morning to study. She was never happy with her school work until she thought it was perfect. In eighteen eighty, Ida finished college. In August of that year, she got a teaching job in Poland, Ohio. It paid five hundred dollars a year.

RAY FREEMAN: Miss Tarbell learned that she was expected to teach subjects about which she knew nothing. She was able to do so by reading the school books before the students did. She was a successful teacher, but the work, she decided, was too difficult for the amount she was paid. So she returned home after one year. A small newspaper in the town of Meadville soon offered her a job.

Many years later, Ida Tarbell said she had never considered being a writer. She took the job with the newspaper only because she needed the money. At first, she worked only a few hours each week.

Later, however, she was working sixteen hours a day. She discovered that she loved to see things she had written printed in the paper. She worked very hard at becoming a good writer.

SHIRLEY GRIFFITH: Miss Tarbell enjoyed working for the newspaper. She discovered, though, that she was interested in stories that were too long for the paper to print. She also wanted to study in France. To earn money while in Paris, she decided she would write for American magazines.

Several magazines soon learned that she was a serious writer.

RAY FREEMAN: A man named Samuel McClure visited Miss Tarbell in Paris. He owned a magazine named McClure's. Mister McClure had read several of her stories. He wanted her to return to the United States and work for his magazine. She immediately understood that this was a very good offer. But she said no. She proposed that she write for McClure's from Paris.

Ida Tarbell wrote many stories for McClure's. She did this for some time before returning to the United States. Her writing was very popular. She helped make McClure's one of the most successful magazines of its day.

One of her first jobs for the magazine was a series of stories about the life of the French Emperor Napoleon. The series was printed in McClure's Magazine in eighteen ninety-four. It was an immediate success. The series was later printed as a book. It was very popular for a number of years.

SHIRLEY GRIFFITH: Her next project was a series about the life of American President Abraham Lincoln. She began her research by talking with people who had known him. She used nothing they told her, however, unless she could prove it was true to the best of her ability.

Through the years, she would write eight books about President Lincoln. 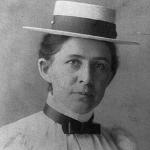 She used her reporting skills against one of the most powerful companies in the world.

Her reports showed that Standard Oil used illegal methods to make other companies lose business. One method was to sell oil in one area of the country for much less than the oil was worth.

This caused smaller companies in that area to fail. They could not sell their oil for that low a price and still make a profit. After a company failed, Standard Oil would then increase the price of its oil. This kind of unfair competition was illegal.

SHIRLEY GRIFFITH: Miss Tarbell had trouble discovering information about the Standard Oil Company. She tried to talk to businessmen who worked in the oil business. At first, few would agree to talk.

They were afraid of the Standard Oil Company and its owner, John D. Rockefeller. He was one of the richest and most powerful men in the world.

Miss Tarbell kept seeking information. She was told by one man that Rockefeller would try to destroy McClure's Magazine. But she did not listen to the threats. She soon found evidence that Standard Oil had been using unfair and illegal methods to destroy other oil companies. Soon many people were helping her find the evidence she needed.

RAY FREEMAN: Ida Tarbell's investigations into Standard Oil were partly responsible for later legal action by the federal government against the company. The case began in nineteen-oh-six. In nineteen eleven, the Supreme Court of the United States ruled against Standard Oil because of its illegal dealings. The decision was a major one. It forced the huge company to separate into thirty-six different companies.

John D. Rockefeller never had to appear in court himself. Yet the public felt he was responsible for his company's illegal actions. The investigative work of Ida Tarbell helped form that public opinion. That investigative work continues to be what she is known for, even though some of her later writings defended

SHIRLEY GRIFFITH: A picture has survived from the long ago days when Ida Tarbell took on the giant Standard Oil Company. It shows John D. Rockefeller walking to his car. It was taken after his company had lost an important court battle. He is wearing a tall black hat and a long coat. He looks angry.

Several people are watching the famous man from behind the car. One is a very tall women. Mister Rockefeller does not see her.

If you look closely at the picture, you can see the face of Ida Tarbell. She is smiling. If you know the story, her smile clearly says: "I won."

SHIRLEY GRIFFITH: And I'm Shirley Griffith. Join us again next week at this time for another PEOPLE IN AMERICA program on VOA.