New US Law Cuts Out Private Lenders for Student Loans

Update Required To play the media you will need to either update your browser to a recent version or update your Flash plugin.
By Nancy Steinbach
2010-4-14 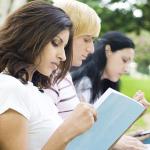 Today we talk more about the costs of higher education in the United States. If you missed last week's report, you can find it at 51voa.com.

Foreign students who need financial aid generally have to seek it from the school itself or their own government or employer.

If you follow the news, then you know that President Obama recently signed health care reform legislation. But one of the two bills he signed into law also made unrelated changes in the federal student loan program.

These changes will require new loans to come directly from the Department of Education. The department already makes these federally guaranteed loans for American citizens and permanent legal residents.

But since nineteen ninety-three it has also paid private lenders to provide them. Now, as of July first, all new loans will go though the direct loan program only.

Officials say the new law will save the government sixty-one billion dollars over ten years. The plan is to use more than half the savings to provide more federal Pell Grants to needy students. A few billion will also go to schools that traditionally serve minorities and to help two-year community colleges.

David Baime is a senior vice president of the American Association of Community Colleges.

DAVID BAIME: "Everybody in higher education benefits from almost all of this bill."

The new law will reduce the most that borrowers must repay each year from fifteen percent of their income to ten percent. And the longest repayment period will be shortened from twenty-five years. Any remaining debt will be forgiven after twenty years -- or ten if borrowers enter public service.

Supporters in higher education said the final bill did not go far enough. Republican opponents called it an unnecessary government takeover of a private industry. Another criticism was that the financial services industry could lose about thirty thousand jobs.

The Department of Education reported last year that about two-thirds of graduates from four-year colleges had student loan debt. The average was about twenty-three thousand dollars.

And that's the VOA Special English Education Report, written by Nancy Steinbach. You can discuss education and other subjects on our Facebook page at VOA Learning English. And you can find transcripts and podcasts at 51voa.com. I'm Steve Ember.