Update Required To play the media you will need to either update your browser to a recent version or update your Flash plugin.
By Shelley Gollust
2010-6-19 Photo: loc.gov
"This Land is Your Land" became his most famous song.

STEVE EMBER: And I'm Steve Ember with the VOA Special English program, PEOPLE IN AMERICA. Today, we complete our story about songwriter and singer Woody Guthrie.

MARY TILLOTSON: Woody Guthrie grew up in Oklahoma and Texas during the nineteen twenties. A short time later, many farms in these states failed. Extreme dry weather ruined the soil. This area became known as the Dust Bowl.

Like many people, Woody left for California to find work. However, many people could only find work on farms gathering fruit or other crops. These workers often lived in camps with poor conditions.

Woody visited these farm worker camps. He played his guitar and sang songs he wrote that described the conditions at the camp he was visiting.

STEVE EMBER: Labor union organizers in California found Woody Guthrie useful to their cause. They urged him to go to New York City to make recordings of his songs.

Woody liked the idea and left California for New York City in nineteen forty. There he met Alan Lomax, an expert on America's traditional music. Lomax worked for the United States Library of Congress in Washington, D.C. He collected and recorded traditional American folk music. When he heard Woody sing, Lomax knew he had found a true singer of American folk music. 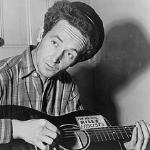 MARY TILLOTSON: Alan Lomax recorded many of Woody's songs for the Library of Congress. He also helped Woody find work in New York. One company agreed to record some of Woody's songs. The record he made was called "Dust Bowl Ballads." The songs told stories of people who had lost their land. Many music critics praised Woody and the songs he wrote.

Lomax also helped Woody get a job with CBS Radio. He sang and played folk music on a radio program that was broadcast across the United States.

STEVE EMBER: Woody and several other musicians joined together to write political protest songs. One of these was Pete Seeger. Woody wrote performed with a group called the Almanac Singers. Later, some members of the group formed the folk singing group called the Weavers.

It was during this time in New York that Woody wrote what became his most famous song, "This Land is Your Land." He described the beauty and richness of America that he had seen during his travels. He believed America should be a place that belongs to rich and poor people alike. The first version of his song expressed opposition to private property.

MARY TILLOTSON: In nineteen forty-one, the Interior Department asked Woody Guthrie to write songs supporting the building of the Bonneville Dam on the Columbia River in Washington state. He wrote twenty-six songs in a month. The best known of these is "Roll on Columbia."

STEVE EMBER: Woody Guthrie wrote a book about his early life in Oklahoma and Texas. It was published in nineteen forty-three. He called it "Bound for Glory." He described his childhood, and the pain of watching his mother slowly becoming insane. He also wrote about his travels and the needy people he saw in many parts of America. One book critic wrote: "Someday, people are going to wake up and realize that Woody Guthrie and his songs are a national treasure, like the Yellowstone or Yosemite parks."

MARY TILLOTSON: During World War Two, Woody joined America's Merchant Marine. The Merchant Marine transported soldiers and supplies across the Atlantic Ocean to Europe. Later, Woody served in the Army. He returned to New York when the war ended.

Woody's wife had left him a few years earlier. In nineteen forty-five, he married Marjorie Mazia. She was a dancer with the Martha Graham dance group. Woody and Marjorie had a daughter named Cathy Ann. In nineteen fifty, Woody began writing songs for children. These became very popular. Here is one called "Riding in My Car." It shows his sense of fun and humor.

One of the first songs Woody Guthrie wrote was about fleeing his home in the Dust Bowl.

Woody Guthrie began noting something strange about himself. He found that the words he wrote often did not make sense. And he had sudden attacks of uncontrollable shaking. In nineteen fifty-two, doctors confirmed his worst fears. He had Huntington's Chorea, the same disease of the brain and nervous system that had killed his mother. Woody Guthrie was forty years old.

MARY TILLOTSON: There was no treatment for the disease. His condition got worse. In nineteen fifty-four, Woody Guthrie traveled one more time across America. He wanted to see the places where he had lived and the workers' camps where he had sung. Old friends had trouble recognizing him. Instead of a young man full of life, they saw an old man who could not speak clearly or control his shaking.

Finally, he entered a hospital because he could no longer care for himself. But while he seemed to be forgotten, his music was not. By the late nineteen fifties, folk music became popular again in the United States. More Americans began listening and playing the songs of Woody Guthrie.

Young folk singers, like Bob Dylan, came to New York to visit Woody in the hospital. Dylan and others copied the way Woody sang and played the guitar. And like Woody, they wrote protest songs that called for social and political justice.

STEVE EMBER: Woody Guthrie remained in the hospital until he died in nineteen sixty-seven. His family and friends visited him each week. In the last years of his life, Woody could hardly speak. But his family and friends knew he still believed in the causes he had sung and written about all his life. They knew this because when they sang his songs, Woody's eyes would become brighter and his defiant spirit would shine through.

STEVE EMBER: And I'm Steve Ember. Join us again next week for another PEOPLE IN AMERICA program on the Voice of America.