Update Required To play the media you will need to either update your browser to a recent version or update your Flash plugin.
By George Grow
24 August, 2017


Jessi Calzado-Esponda lives in the United States but spent her early years in Cuba.

Her family lived in Havana. Electric power was undependable. The 29-year-old woman says her family would turn to music when the neighborhood lost power. 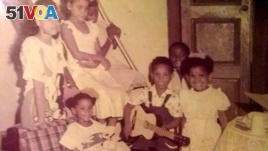 Jessi Calzado-Esponda (center) is seen at home in Cuba before she left as an accidental refugee at the age of seven. (J. Soh/VOA)

This memory is one of few Calzado-Esponda has from her childhood on the island nation.

She left at age seven – but not by choice. Her aunt had decided to flee from Cuba on a small raft. The young Calzado-Esponda and her grandmother stopped just to say goodbye. But disorder broke out and the little girl and her grandmother were on the raft when it launched. Neither could swim.

So, Calzado-Esponda became an accidental refugee, floating away from her home.

"Literally in the blink of an eye, I lost my mom, my immediate family and my beloved Cuba," Calzado-Esponda said. She would not see her family again for almost 20 years.

The United States Coast Guard found the raft at sea and took the child and her relatives to the U.S. base at Guantanamo Bay, Cuba. They lived there for several months before they were moved to Tampa, Florida.

That is when Calzado-Esponda's American life began; it is a story almost as unusual as the one that got her to the United States. At one time homeless, she later launched a travel agency which specializes in group trips to Cuba.

Calzado-Esponda remembers her first years in the U.S. as happy ones, but she missed her parents and brother.

Several years after their arrival in Tampa, Calzado-Esponda's aunt killed herself.

"It was like losing a second mother all over again," Calzado-Esponda said. The severe financial loss made the situation more complex. Her aunt had worked in a good-paying job.

Calzado-Esponda and her grandmother had little money and moved into a homeless shelter.

"It was just really, really, really hard," Calzado-Esponda told VOA. Sharing a bedroom with strangers and having to eat meals at set times were not things she was used to.

But something wonderful happened when she was about 12 years old. A music teacher and shelter volunteer took an interest in Calzado-Esponda. The teacher urged her to play the piano and other musical instruments.

This led to a six-year study program with what was then the Gulf Coast Youth Choirs. She received financial aid to pay for her training.

Traveling with the choir, Calzado-Esponda developed a love of traveling, which would be important later in her life.

During that period, the homeless shelter helped her grandmother find a job. Calzado-Esponda says her grandmother never learned to speak English or drive a car. But she was able to earn enough to move out of the shelter and into an apartment.

"Little by little, of course we struggled here and there, but we made it. And, again, it was a lot to do with the community and the support that we got from our community."

Calzado-Esponda moved in her twenties to Washington, D.C. She found a job in the office of a U.S. congressman. But at 27, she suddenly faced another major challenge. A car accident left her with a severe brain injury.

The injury forced her to leave her job. The young woman suffered some memory loss. She could not remember people's names or what she said to others. She was often sick to her stomach and her back hurt.

Calzado-Esponda says the injury was one of the most heartbreaking things she had experienced. But, slowly she recovered.

She says she still has some really hard days but that she chooses to "get up the next day and try again."

Calzado-Esponda got a visa to return to Cuba when she learned her mother was sick. It had been twenty years since she left the island accidentally. She had never returned.

Sadly, the day before Calzado-Esponda arrived in Cuba, her mother died.

"So, the very first time I ever met my whole family was at my mom's funeral. And it's one of those things that's very surreal and it's also very bittersweet."

She says she was amazed at the love and support she received.

Just after the visit, then-President Barack Obama announced an easing of relations between the U.S. and Cuba. That is when Calzado-Esponda started her travel agency. She named it Cuba Inspires.

After more than a year of operation, her business is off to a good start. Among her first clients were the reality television stars, the Kardashians.

Calzado-Esponda hopes to build on her success with events, such as the U.S./Cuban youth choir competition, for which she recently won permission. She sees herself as an unofficial ambassador.

June Soh reported this story for VOANews. George Grow adapted her report for Learning English. Caty Weaver was the editor.

aunt – n. the sister of one's father or mother; the wife of one's uncle or aunt

raft – n. a flat structure for transportation on water

apartment – n. a room or several rooms that is used as a place to live

client – n. someone who uses the professional services or advice of another