Activists Versus Media at the University of Missouri

Update Required To play the media you will need to either update your browser to a recent version or update your Flash plugin.
By Ashley Thompson
10 November, 2015


For several weeks, Hashtack ConcernedStudent1950 activists were looking for media coverage of their protest at the University of Missouri or Hashtack Mizzou.

The protesters called for university president Tim Wolfe to step down. They said he did not respond to months of incidents of racism on campus.

The protest and pressure on social media led to the resignation of Tim Wolfe and the chancellor on Monday. 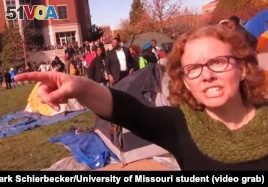 Now at Hashtack Mizzou, it is Hashtack Concerned1950 versus the media. An online debate has started on First Amendment rights.

"The right of the people peaceably to assemble" and "the freedom of the press" are both rights protected in the First Amendment of the U.S. Constitution.

The activist group has tweeted several requests on social media for the media to respect their privacy.

They have set up a campsite in a public space on campus called the Carnahan Quad. But because it is a public space, members of the media also have the right to be there.

Student journalist Mark Schierbecker posted a video Monday night from the campus. The video showed a photographer being pushed away and shoved by #ConcernedStudent1950 activists.

In the video, photographer and college student Tim Tai explained to the activists that the First Amendment "protects your right to be here and mine." One protester told Tai to "forget the law, how about humanity?"

A group of activists then encircled Tai to prevent him from taking photos. "You're pushing me," Tai says to the group.

Tai has received support on social media. But he later tweeted that he did not wish to receive attention, and that he did not have "ill will toward the people in the video. I think they had good intentions though I'm not sure why it resorted to shoving."

Schierbecker, who filmed the scene between Tai and the activists, made it into the campsite. On camera, he asks a woman, later identified as a Mizzou professor of mass media, if he can talk to her.

The professor, Melissa Click, tells Schierbecker that he does not have the right to be at the campsite. The professor tells the student he must leave.

Click then shouts that she needs help removing the reporter from the campsite. She says she is going to "need some muscle."

In a statement Tuesday, University of Missouri Dean David Kurpius said the events Monday provided an "opportunity to educate students" about the rights to a free press.

"The events of Nov. 9 have raised numerous issues regarding the boundaries of the First Amendment. Although the attention on journalists has shifted the focus from the news of the day, it provides an opportunity to educate students and citizens about the role of a free press."

By mid-day Tuesday, signs on the campus protesting the media had been removed. The group began handing out pieces of paper that said the group should instead "welcome and thank" members of the media.

Ashley Thompson wrote this story for VOA Learning English. Hai Do was the editor.

resignation - n. an act of giving up a job or position

versus - preposition use to indicate two people, teams or groups that are competeing or fighting against each other

assemble - v. to meet together in one place