Update Required To play the media you will need to either update your browser to a recent version or update your Flash plugin.
By Jonathan Evans
03 October, 2018


Afghan health officials say militants are interfering in their effort to protect children in western Afghanistan against polio virus.

Abdul Jabar Shayeq is head of the health department in Farah province. He told VOA that the Taliban is blocking efforts to provide polio vaccine in some unsafe areas. He said the group wants the power to decide who vaccinates the children.

Shayeq told VOA, "Armed Taliban do not accept our standards, and push for their conditions, in an effort to control the vaccination process. They do not allow the vaccination campaign to be implemented independently."

He added that the Taliban is not directly opposing the vaccination campaign. He said its members are making it difficult for vaccinators to do their job correctly and to follow international standards. 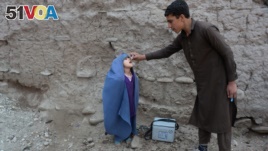 An Afghan health worker administers the polio vaccine to a child during a vaccination campaign on the outskirts of Jalalabad on March 12, 2018.

Afghanistan has the largest number of registered polio cases in the world. Activists in Farah province want opposing sides to not politicize the vaccination campaign.

One activist, Nasim Minawal, told VOA the campaign is important and does not belong to the government or any other group. He added that "this is an important preventive program for children. Children who are suffering from polio [because of lack of vaccination] have no treatment whatsoever."

Minawal called on the Taliban not to interfere with the process and to let health workers do their jobs.

Some tribal leaders are calling on local leaders in rural areas to use their influence to help with the vaccinations.

Hameedullah Khan is a tribal leader in Farah. He believes efforts to block the vaccinations are non-Islamic. He told VOA that he wants community leaders to support vaccination efforts.

"I call on religious scholars, tribal leaders and community members not to politicize polio vaccination," Khan said. He added that they should be concerned for "the well-being of their children" and make sure they "receive the vaccination in a timely manner."

Records from the Afghan ministry of public health show a decrease in the total number of polio cases from 2017. Fourteen polio cases were reported in Afghanistan last year. This year, there have been 10 cases.

Khushal Zaland reported this story for VOA News. Jonathan Evans adapted it for Learning English. George Grow was the editor.

implement – v. to begin to do or use something, such as a plan; to make something active or effective

scholar – n. someone who has done studies in a special field or subject