Update Required To play the media you will need to either update your browser to a recent version or update your Flash plugin.
By Mario Ritter Jr.
06 May 2020


Singapore has been praised for limiting the spread of the coronavirus. But infections have risen recently among migrant workers.

The city-state now has the most infections in Southeast Asia. As a result, Singapore is bringing back some restrictions.

Singapore's Ministry of Health said that, as of Monday, about 87 percent of reported cases are workers living in dorms. These kinds of housing can have up to 20 people living in one room. 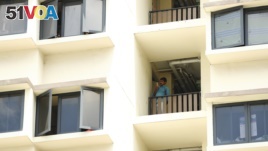 A foreign worker talks on the phone outside his room at the WestLite Toh Guan dormitory after it was declared an isolation area under the Infectious Diseases Act, April 10, 2020. (AP Photo/Yong Teck Lim)

Singapore is known for having a high number of foreign workers who come from Britain and other places to work in business or banking. But many foreign laborers come as well. They include Philippine cleaners and Bangladeshi building laborers.

The activist group Transient Workers Count Too said it has been warning that crowding among migrants presented a risk of viral spread. Alex Au is the group's vice president. He said, "There's no denying now that density and poor ventilation in our dorms" helps spread disease.

But he said that is only part of the problem.

Au said Singapore is too dependent on low-cost labor. Migrant workers there are getting attention now because they make up a large majority of Singapore's COVID-19 cases.

Before the large increase in infections, experts had praised Singapore for its strong actions to limit the spread of the disease. Experts said measures such as fast treatment for patients, following contacts of people who could carry the disease and travel restrictions were successful.

Travel restrictions, however, could not prevent the spread of COVID-19 within Singapore. Prime Minister Lee Hsien Loong said the disease was "hidden" as it spread largely among laborers. New cases have increased in the past three weeks after being comparatively low before then.

HOME is a non-profit organization in Singapore aimed at helping workers. The group said in a statement: "The COVID-19 pandemic has shown that migrant workers are indispensable" to the operation of the country.

Singapore's Manpower Minister Josephine Teo said there is "no question" that Singapore should improve conditions in the dorms.

Teo's ministry is helping with providing food and supervising workers at the dorms. But she said Singapore must deal with the virus emergency before it can deal with workers' living conditions over the long term.

The Health Ministry said it is increasing testing for the virus in the dorms. It is also following possible carriers, a method known as contact tracing.

Officials are especially concerned about what are called "unlinked" cases. For these cases, it is unclear how the virus spread from one person to the next.

Labor activist Au said he hopes the health crisis will bring attention to important labor issues like high payments to recruiters and unpaid work for migrants.

Au said labor unfairness is a "structural problem" that opens the country to many other problems. He added, "It's hard to predict where the next crisis might come from."

dorm(itories) –n. a building on the grounds of a school or similar organization with rooms where people can live

density –n. have a lot of people living in a small place

ventilation –n. the quality of how much air can pass through a room, building, vehicle or structure

reservoir –n. an extra supply of something

recruiters–n. someone who gets others to join a company or organization