Update Required To play the media you will need to either update your browser to a recent version or update your Flash plugin.
By VOA
05 March, 2017

Today we are talking about Thomas Jefferson. Although he took office in 1801, he is still one of the country's best-known and most popular presidents. You can see a memorial honoring him in Washington, DC. 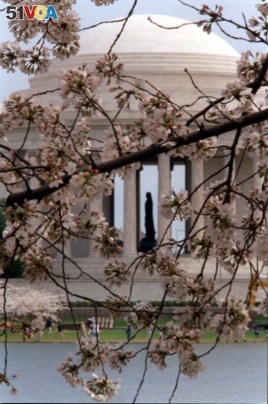 The Thomas Jefferson statue in the Jefferson Memorial on the Tidal Basin in Washington, April 6, 1999

Jefferson is often linked to the country's history of self-government, separation of church and state, and public education.

Over time, Jefferson's name also became linked to the continuation of slavery until the Civil War, and to the loss of land for Native Americans.

Jefferson was born in 1743 and grew up in the hills and low mountains of Virginia. His family's wealth enabled him to get an excellent education.

In the 1770s, Jefferson supported the American Revolution against Britain. He is probably most famous for being the lead writer of the Declaration of Independence.

Jefferson went on to hold many positions in the country's new state and national governments. He served as governor of Virginia, a minister to France, secretary of state for President George Washington, and the vice president under President John Adams.

Jefferson played an important part in the creation of the U.S. But he often wrote to friends about how he most wanted to retire from public service and return to his home in Virginia.

In the 1760s, he designed a house there that he called Monticello – the word means "little mountain" in Italian.

About 130 slaves lived on Monticello's grounds at any time. They worked in Jefferson's home, farms, and on special projects, such as making cabinets and nails.

Jefferson owned about 600 slaves during his life. Yet he said he disliked slavery. He believed God would judge slave owners severely.

And, of course, Jefferson himself wrote in the Declaration of Independence "all men are created equal" and have the right to "Life, Liberty and the pursuit of Happiness."

Yet Jefferson did not use his political power to end slavery. He expected future generations would permit slavery to end slowly across the country.

Jefferson's words and actions on slavery are contradictory. This conflict is especially evident because Jefferson likely had a long relationship with a slave at Monticello.

Her name was Sally Hemings. Evidence suggests that Jefferson was the father of her six children of record.

In 1801, Thomas Jefferson left Monticello to become the third U.S. president. His inauguration was the first held in Washington, DC.

As president, Jefferson cut the national debt. He reduced the military. He disliked the power of the Supreme Court over the laws Congress made. And he rejected appearances that made the U.S. president look like a European king.

One of the lasting images of Jefferson is of him receiving guests in old clothes and slippers.

But as president, Jefferson also appeared strong and powerful when dealing with foreign nations. Jefferson increased American naval forces in the Mediterranean to guard against threats to American ships.

And he permitted U.S. officials to buy a huge piece of land from France, even though the Louisiana Purchase added to the national debt and exceeded the power the Constitution gave the president.

In general, historians consider Jefferson's first term as president a success. Voters did, too, because he easily won a second term.

But those last four years were difficult. Jefferson's popularity suffered, especially when he stopped all American trade with Europe. Jefferson aimed to limit U.S. involvement in a war between Britain and France.

Instead, critics say he ruined the American economy. 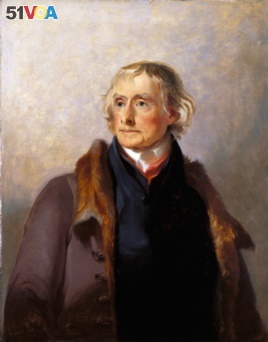 Portrait of Jefferson by Thomas Sully, 1821

Critics also attacked both Jefferson's political ideas and his personal qualities. George Washington worried that Jefferson would weaken the strong federal government he had worked hard to create.

And even friends suggested in their letters that Jefferson was too idealistic.

Jefferson's opponents also accused him of not being a Christian, although he said he was. However, he did not believe the government should make rules about religion.

He wrote that the government should worry only about acts that hurt other people. He said it does not harm him if his neighbor says "there are 20 gods or no gods. It neither picks my pocket nor breaks my leg."

Jefferson's thinking on the separation of church and state remains important – and, in general, popular – in the U.S. today.

However, Jefferson is linked to problems faced by Native Americans. He tried to get Indian nations to enter into treaties that ultimately took away their land. He wanted Native Americans to become more like European-Americans. His policies made them depend on the federal government.

And Jefferson took no major action to end slavery, either in his personal life or as a public official.

At the end of his life, Jefferson wrote proudly about his accomplishments. He said he wanted to be remembered for three things: writing the Declaration of Independence, supporting religious freedom, and creating the University of Virginia.

For the most part, he is.

Jefferson also supported free public education, especially for those who could not pay for school.

But his time at Monticello had many sorrows. His wife, Martha, had died in 1782 after difficulty in childbirth. Most of his children also died before him.

In addition, the cost of improving and caring for Monticello, as well as the money he spent on fine wine and good food, had ruined him financially.

Eventually, one of his daughters had to sell her father's beloved Monticello and the slaves who lived there to pay his debts.

Jefferson died in his bed at the age of 83. The last detail of his life – which Americans love to tell – is that he passed away on America's birthday, exactly 50 years after the signing of the Declaration of Independence.

Did you enjoy learning about America's founders? Give us your suggestions in the Comments and on 51VOA.COM.

contradictory – adj. involving or having information that disagrees with other information

significant ­– adj. large enough to be noticed or have an effect