Update Required To play the media you will need to either update your browser to a recent version or update your Flash plugin.
By Anne Ball
05 March, 2017


For almost as long as people have walked on Earth, they have looked up at the moon and wondered: How did the moon get there? How long has it been there?

Scientists have studied these questions. And now, a group of researchers from California have an answer. Based on their studies, they think the moon is 4.51 billion years old.

For years, researchers have been studying the many rocks American astronauts brought back from the moon between 1969 and 1972. The early rock studies led many scientists to think the moon was formed long ago -- about 4.3 billion years ago.

Scientists are studying moon rocks, such as these brought back by Apollo 11 astronauts.

Scientists believe the moon was created when a huge rocky object about the size of Mars struck a very young Earth. Then some of the pieces from that violent crash came together in space to form the moon.

But that estimated age, 4.3 billion years, created a problem for scientists. That is because it does not leave much time for life to get started and develop on planet Earth.

Melanie Barboni is a researcher in the Department of Earth, Planetary and Space Sciences at the University of California, Los Angeles (UCLA).

"Here at UCLA, there has been this study that has found that life could have appeared as early as 4.1 billion years old. So now if you believe the giant impact occurred at 4.3, it doesn't leave you a long time between the impact and basically the Earth being half destroyed and then the Earth acquiring all the conditions you need for life."

Barboni and other researchers at UCLA wanted a better, more exact estimate of when the moon was formed. They found their answer by studying a moon rock brought back to Earth in 1971. Barboni says they looked closely for signs of a mineral called zircon.

She says saving those extra years solves the problem of life on Earth. And this solution gives scientists a better understanding of how life formed here and how it might form on other planets.

"... you have much more time to cool down your Earth to like start having your plate tectonics things again, generate the atmosphere, generate the water and then finally having all the conditions met for life."

The new information means the moon was orbiting Earth just 60 million years after the birth of our solar system.

Noah Petro works as a researcher for NASA, the American space agency. He studies the moon at NASA's Goddard Space Flight Center in Maryland.

Petro is a geologist: someone with an expertise in rocks. He points out that the UCLA researchers were using a single rock to estimate the age of the moon's surface.

He believes that the moon "is in the range of 4.5 billion years old."

The gift that keeps giving

Astronaut Edwin Aldrin, the second man on the moon, walks by the footpad of the Apollo 11 Lunar Module. July, 1969. (AP/Photo, NASA file)

"Lunar samples are the gift that keeps on giving," Petro says. "We will be studying them 45 years from now and 45 years after that."

But Petro says, "as much as we use rocks, it isn't set in stone what happened."

That is because technology is always changing and new methods become available, providing new information from the rocks. Also, answers can be different, depending on what kinds of assumptions scientists make and how the information is processed.

"The rocks contain truth in them, it is up to us to understand what they are telling us," Petro explains.

Scientists agree that a huge object they named Theia crashed into the young Earth to create the moon. But Petro says some evidence "does not really fit the model" of an impact — like the fact there is water inside the moon. Water should not be there if the moon resulted from a huge object striking Earth.

This means the model needs to be "revisited," Petro says. And that means scientists will continue to study the moon to find more answers.

Currently, Petro is busy with NASA's Lunar Reconnaissance Orbiter project. Since June 2009, the space agency has been gathering information from the orbiter, which is circling the moon. Scientists have seen new impact areas that show where meteorites or other objects have struck the surface.

Mission to the far side?

This image shows the far side of the moon, illuminated by the sun, as it crosses between the DSCOVR spacecraft's Earth Polychromatic Imaging Camera (EPIC) camera and telescope, and the Earth - one million miles away. (Credits: NASA/NOAA)

Scientists have also learned that the far side of the moon — the side facing away from Earth — does appear to be different than the side we see from here. Petro says there is less volcanic activity on the far side and there is a large crater, or impact area, there. He hopes NASA will be able to send a probe to the crater to find out why that side is so different.

Sending a probe to the far side of the moon will require a special satellite because the spacecraft will not have a straight line to communicate with Earth. 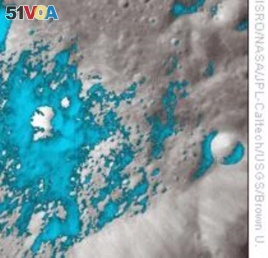 Water-rich minerals (light blue) are shown around a small crater on the far side of the Moon. (AP/Photo)

So humans are far from finished looking up at that bright round object in the sky, and wondering, what is up there?

We want to hear from you. Write to us in the Comments Section. Find us on 51VOA.COM.

impact – n. the act or force of one thing hitting another

plate tectonics – n. the geology theory that Earth's surface is made of very large sections or plates that move very slowly

solar system – n. a group of planets and objects that orbit around a star

meteorite – n. a piece of rock or metal that has fallen to the ground from outer space

probe – n. a long thin scientific object used to measure or get information