Update Required To play the media you will need to either update your browser to a recent version or update your Flash plugin.
By Bryan Lynn
21 April 2021


Apple has announced a new iPad equipped with the same chip technology used in Mac computers.

The company also released a line of new iMac computers and launched a small tracking device for important personal objects. The new products were announced during an online launch event Tuesday.

The new iPad Pro contains Apple's M1 chip, which the company claims increases the tablet computer's processing speed by 50 percent. It is the first time Apple has put its M1 chip inside an iPad. Apple announced last year that it had decided to replace Intel-based chips in all its Macs with its own version. 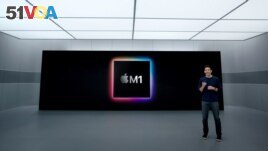 Apple's senior vice president of Hardware Engineering John Ternus talks about the M1 processor used in iPad Pro and iMac, in this still image from the keynote video of a special event at Apple Park in Cupertino, California, U.S. released April 20, 2021. A

The new iPad Pros also contain additional ports for connecting larger monitors and were built with improved video quality. Apple said the devices also have better keyboard systems that work more like most laptop computers. They also offer connectivity to 5G, the next generation of wireless technology.

Apple's move to release more powerful iPads is seen as a way to meet rising demand as more people work from home during the coronavirus pandemic. The new iPads lowest-priced version costs $799 and will be available for online orders on April 30.

Another one of the company's new products is called AirTag. It is a small device that can be attached to objects that people commonly carry, such as keys or money holders. If lost, the object attached to an AirTag can be tracked with a user's iPhone.

The AirTag system uses the company's existing "Find My" technology to help users find Apple devices or Macs that get lost. The system uses Bluetooth technology when the lost device is nearby and Apple's Find My network.

During the launch event, Apple showed that a person with AirTags can use their iPhone to be guided with step-by-step directions to the lost device. The phone uses its camera and other directional equipment to guide the user. Apple says currently, only iPhone 11 and 12 users will be able to use this service.

In a statement about the AirTags, Apple said the system was "designed from the ground up to keep location data private and secure." It said no data or location history is physically stored inside AirTag. Any communication involving the Find My network is also encrypted so that only the owner of the device sees the location data.

In addition, the company said it built in tools aimed at preventing people from being tracked with AirTag unknowingly. For example, AirTag devices that become separated from owners for longer periods of time play a sound when moved to draw attention. Apple says its devices can also identify an AirTag that is not with its owner and can inform users if an unknown AirTag is seen traveling with them from place to place.

Apple also announced the launch of a line of new, thinner iMacs, which are also equipped with the M1 chip. The computers are designed to be used on a desktop. They have better cameras and speakers for improved video meetings. They also have improved video quality and include keyboards with the same fingerprint identification sensor that unlocks iPhones.

The iMacs, which come in several bright colors, have a starting price of $1,299 and are expected to be available in May.

Apple also announced a new podcast subscription service aimed to compete with other podcast companies such as Spotify.

Bryan Lynn wrote this story for VOA Learning English based on reports from Apple, The Associated Press, Reuters and Agence France-Presse. Mario Ritter, Jr. was the editor.

track – v. to follow the course along which someone or something moves or proceeds

tablet – n. a small, portable computer that you use by touching the screen

monitor – n. a device, like the screen of a TV, that lets a person see computer activities or listen to programs and sound

laptop – n. a computer that is small enough to be carried around and used while a person is sitting

key – n. a piece of metal cut into a particular shape and used for locking things such as doors, or for starting an engine

subscription – n. an amount of money paid to regularly receive a product or service