Update Required To play the media you will need to either update your browser to a recent version or update your Flash plugin.
By Susan Shand
18 February 2020


Computer maker Apple is warning investors that it will not meet its three-month financial goal because of the coronavirus outbreak in China.

The company said Monday that all of its iPhone factories are outside Hubei province, where the outbreak began. It also said that all of the factories have reopened, but production is moving slowly. 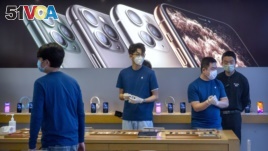 Employees wear face masks as they stand in a reopened Apple Store in Beijing, Friday, Feb. 14, 2020. China on Friday reported another sharp rise in the number of people infected with a new virus, as the death toll neared 1,400. Apple had closed all...

"The health...of every person who helps make these products possible is our...priority," Apple said in a statement.

The number of people who died from the virus reached at least 1,770 by Monday. The new coronavirus causes a disease called COVID-19.

Apple says demand for iPhones has fallen in China because many of Apple's 42 stores there have been closed or have reduced hours. China is Apple's third largest market for iPhones, after the United States and Europe.

One person told the Reuters News Agency that Apple's supply chain was affected by the outbreak. Apple's suppliers and other smart phone makers are expected to face financial difficulties in the future.

"If one...factory stays closed and they're the only supplier, then everyone has to stop and wait. And if there are two suppliers and one is shut down, then we need the other to do more," said the person who did not have permission to speak about the company and did not want to be identified.

Stacy Rasgon is a financial expert with Bernstein, a business advising company. He said Apple's problems also mean fewer chips will be sold for cell phones because most chips are made in China.

The research company Canalys estimates that Apple and competitor Huawei receive 99 percent of their production from China.

"Every electronic supply chain runs through China in a big way," Rasgon said.

Outside of China, Apple said iPhone demand has been strong. The company expects to meet its sales goals for the rest of the world, but it is unclear if difficulties with supplies will affect sales in the future.

Late last month, Apple said it expected revenue between $63 and $67 billion for the three-month period ending on March 30.

The Associated Press and the Reuters News Agency reported this story. Susan Shand adapted it for VOA Learning English. Mario Ritter, Jr. was the editor.

chip - n. a very small piece of hard material (called silicon) in a computer or other device that contains many electronic circuits

revenue - n. money that is made by or paid to a business or an organization

supply chain - n. the movement of goods from one factory to another