Update Required To play the media you will need to either update your browser to a recent version or update your Flash plugin.
By Carolyn Nicander Mohr
14 June, 2017


Last week was WWDC, Apple's annual conference about what is in the future from the company.

iOS is the new operating system for iPhones and iPads. It will be available in the fall.

Apple's new "Do Not Disturb While Driving" feature may make driving safer. When you turn on this feature in Settings, your phone will know when you are driving. You will not get notifications when this setting is turned on. If you try to use your phone, you will get a reminder that you are driving.

People who call or send you a text message while you are driving will get a notice that you will respond once you stop driving. They will be able to try to contact you again so they can reach you in an emergency.

A new file system will be available in iOS 11 to make it easier to find documents, photos, videos and other files. With this new system, you will be able to find files from your iPhone, iPad, Mac computer and files from other services such as Dropbox and Box. 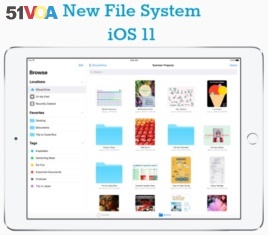 Siri, Apple's voice assistant, gets a new job as a translator. You will be able to ask Siri how to say something in one of five languages. At first, Siri will only be able to translate from English to Chinese, French, German, Italian, and Spanish. More languages will be added later.

Apple's Control Center will have a new look with more controls on one page. Press a section to perform jobs such as changing the volume of music or the brightness of your screen.

The Notes app will get a scanner that lets you take a photo of a document. Notes will then crop the document and let you sign it, then send it off using the Mail or Messages apps.

Messages will sync across iPhone, iPad and Mac computers so that when you delete a message in iMessage, it will be deleted on all of your devices.

Apple Maps will include more information about the inside of shopping centers and airports. The app will let you know which lane you should be in to prepare for a turn while driving.

Maps in iOS 11 will show you the legal speed limit for the road you are on.

Siri will also learn what kind of songs you like. When you ask it to "play some music" it will play your favorite songs and suggest new ones.

The iTunes App Store gets a new look and better organization. Game apps will be separate from other apps in the store. The updated store will rate apps within each section so you can see which apps and games are most popular.

There will also be a Today feature so you can discover the latest apps released that day.

Apple will be updating its MacOS operating system for Mac computers in the fall to High Sierra.

The new file system in iOS 11 will be coming to MacOS High Sierra so you can manage files on your Mac computer and your iPhone/iPad, and keep them in sync.

The Safari browser will be updated to make it the fastest Internet browser. It also will let you turn off autoplay for videos on websites.

You will be able to use Siri on your Mac to play your music.

The Notes app will be updated so you can save your most important notes to the top of your list of notes. You will also be able to add tables and charts to notes.

Apple is introducing a new size iPad. The iPad Pro will now come in a 26.67 centimeter size instead of the 24.64 centimeter size iPad Pro. Apple says the new model is 30 percent faster than the older model. The screen is almost 20 percent larger than the earlier iPad Pro, which makes room for a full-sized keyboard on the screen.

iOS 11 adding new features for this new iPad, such as drag-and-drop for files, links and photos.

This new model has a 10-hour battery life, the same as the earlier model, in spite of its increased screen size.

The Pencil, Apple's iPad Pro stylus, will be able to do new things on the iPad Pro in iOS 11, such as opening Notes when you tap the screen with the Pencil.

The Apple TV will be getting Amazon Video so Prime members can watch their favorites shows on it, such as Mozart in the Jungle, Transparent, and Man in the High Castle.

WatchOS, the operating system for Apple Watch, will be updated to version 4 in the fall. This software will have new faces, including a Siri face that will show information according to the time of day.

In the morning the Siri face may show your calendar appointments, weather and traffic to work. In the evening it may show the time of the sunset, stock prices and an alarm you have set for the next day.

The Apple Watch will also become a more accurate fitness tracker with the 4.0 update. With the update, Apple Watches will be able to connect to fitness equipment at the gym to sync workout information for better accuracy. The Watch and gym equipment will share information such as heart rate, speed and distance.

Workouts can also be more fun. You can set music to start playing when you begin your workout. You may also get rewards when you meet your fitness goals.

WatchOS 4.0 will be released in the fall.

This competitor to Amazon Echo and Google Home will please privacy fans. No information will be sent to Apple until HomePod hears "Hey, Siri."

The HomePod is about 7 inches tall, as tall as an iPhone.

While others thought it looked like a certain hat:

HomePod will sync with Apple Music. You can play Apple Music directly from the HomePod without connecting your phone. Ask Siri to play your favorite playlist or songs from an artist you like. Siri will be able to hear you even if the music is playing loudly in the room.

The HomePod will be available in December for the US, UK and Australia and in more countries next year.

Which of Apple's announcements were the most interesting to you? What else would want to see from Apple?

reminder - n. something that causes you to remember or to think about something

emergency - n. an unexpected and usually dangerous situation that calls for immediate action

file system - n. the way in which files are named and where they are placed for storage and retrieval

voice assistant - n. an application program that can understand natural language and complete electronic tasks for the user

section - n. one of the parts that form something

volume - n. the amount of sound that is produced by a television, radio, stereo, etc.

scanner - n. a device that reads or copies information or images into a computer

sync - v. update computers so the data is the same on both

delete- v. to remove (something, such as words, pictures, or computer files) from a document, recording, computer, etc.

lane - n. a part of road that is marked by painted lines and that is for a single line of vehicles

browser - n. a computer program that is used to find and look at information on the Internet

autoplay- v. a feature that lets a video play automatically when a website is open.

table - n. a collection of information that is arranged in rows and columns

chart - n. information in the form of a table, diagram, etc.

drag-and-drop- v. a feature that allows the user to select an object on a computer screen and move it to a different place on the screen.

stylus - n. a small tool that is used to write or touch buttons on a computer

fitness tracker - n. a wearable device or a computer application that records a person's daily physical activity, together with other data relating to their fitness or health, such as the number of calories burned, heart rate, etc.

workout - n. a period of physical exercise that you do in order to improve your fitness, ability, or performance