Update Required To play the media you will need to either update your browser to a recent version or update your Flash plugin.
By VOA
13 December, 2012

On our show this week, we hear from artists who performed at a show to raise money for victims of Superstorm Sandy...

We tell about a Virginia school and its "Dress for Success" program...

But first, we hear how one religious center is taking steps to increase its membership.

Last week we told how some American churches are taking steps aimed at easing the lives of working parents. Church leaders want to help these families make time to attend worship services and other religious activities.

This week, we tell about another house of worship that is seeking to increase its membership. Shirley Griffith has more about Adas Israel, a synagogue in Washington, DC.

A large crowd of young Jewish adults gathers in the Adas Israel temple on a Friday night. They are offered beer and potato chips. It is more like a party than a religious meeting.

Temple member Elie Greenberg laid out the food and drinks. He knows fewer and fewer young Americans are involved in organized religion. He says it is time to try something new for young Jews.

"The traditional approach to Judaism does not speak to them anymore, and we are constantly looking for innovative ways of reaching them where they are spiritually."

The Reform and Conservative movements of Judaism are the largest Jewish groups in America. A recent study found that only eight percent of their synagogue members are between the ages of 18 and 34.

Julia Crantz was among the crowd at the social hour organized by Elie Greenberg. She says she does not feel the same sense of duty to join a synagogue that past generations did.

"For me, belonging to a synagogue, isn't so important to me as having Jewish experiences and Jewish friendships and experiencing my Judaism in other ways."

Another attendee, Casey Girard, also questions the economics of involvement.

"I think part of the problem is it is so expensive to join and it is something only our parents do."

Adas Israel has begun a project that its leaders hope will appeal to young people. The temple is turning one of its main areas of worship into a sitting room. Anyone going there will be able to enjoy coffee and a free wireless communication system.

Financing for the project is coming mainly from the temple's established, older members.

Adas Israel was formed more than one hundred years ago. It, like many synagogues and churches, was once a center of spiritual life for the community. But America's religious culture is changing and the future of its houses of worship is in question.

"What do synagogues have to know about you – not you, but your generation – that is different from your parents'?"

That is Rabbi Larry Hoffman. He is teaching a group of rabbinical students at Hebrew Union College, a Reform seminary in New York.

One student takes out his iPhone and holds it up so all can see.

"Because of these little gadgets that we can just go find everything, on the spot, in the second that we want them, we live in a world where we want that for everything."

Later, in his office, Rabbi Hoffman says that synagogues need to be reinvented.

Rabbi Hoffman is a member of Synagogue 3000. The group works to reestablish synagogues as powerful centers of modern spiritual and community life. The rabbi leads a Synagogue 3000 project that sends Jewish leaders into a community.

"And says it effect ‘Rabbi, we will not even see you. Fifty percent of your time at least, you should be out there in the coffee shops, in the gyms, in the bars, meeting young people.'"

Elie Greenberg has been doing just that at Adas Israel. And his monthly beer and chips social event is growing.

On this Friday, as the gathering comes to a close, several young women mark the start of the Sabbath by lighting candles. Mr. Greenberg hopes the crowd will stay and pray, like the generations that came before them.

One day a week, more than 700 students dress for success when they attend classes at the Mayfield Intermediate School in Manassas, Virginia. Boys wear suit coats and ties. The girls wear nice clothing like dresses or skirts and blouses.

The head of the school believed that once a week, his students should wear something other than blue jeans. So he created a program called "Dress for Success." He and his teachers hope it will improve the behavior of their students and help them become successful.

"I feel important and confident."

At school, Diana and the other students attend classes and other activities just like they would if they were not dressed-up. This is Diana's first year in the Dress for Success program. She likes it.

"I feel like this program enhances our learning opportunity."

That is why student Shawn Arrigo likes the program.

"If you, like, feel good and you're, like, sitting and it is comfortable, then you're not going to have any problems focusing."

Shawn says he does better in class when he is dressed up.

"It makes me feel more mature."

It also makes him look like one of the people he wants to be like – school principal Jeff Abt, the creator of "Dress for Success."

"I asked the kids if they'd consciously make an effort to wear something different on this day. I think it presented a climate where the students said, ‘You know what, I've worked hard, I'm dressed in my best and I'm going to do my best on this day.'"

"The kids who think about how they're going to dress for school before they come to school, they already are in the right mindset when they walk in the door. And I always shake my kids' hands when they walk in the door and they look me in the face and say, ‘Good morning, Ms. Redler.' And the kids who dress for success are already in that, like, 'head up, shoulders back, good morning' kind of mood. And they start the day off right, they feel more proud of themselves. And when they have that attitude, their behavior is usually better for the rest of the day."

Ms. Redler says the program teaches students to be serious, and improve their grades.

That is why there are Dress for Success signs throughout the school, urging students to join the program.

Jeff Abt says dressing up on Mondays does not mean students must buy expensive new clothes.

"Our kids come from different economic backgrounds, so if they're wearing a collared shirt, and they generally would not, then that will be considered a Dress for Success. But as you saw today, we have kids in suits, students in dresses. We have the whole gamut."

He hopes the lessons students learn while they are dressing for success will help them make better decisions in high school and in life.

"I tell our students if you are dressing for success, if you go to an interview, you're normally looking at your closet saying, ‘What's the best thing in there to show that person I'm the best person for the job?'"

Jeff Abt's students are getting a lot of practice answering that question now, while they have fun dressing up, and feeling like adults. 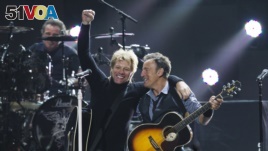 Singers Bon Jovi (L) and Bruce Springsteen perform during the '12-12-12' benefit concert for victims of Superstorm Sandy
Some of the biggest names in the entertainment industry came together Wednesday night at Madison Square Garden in New York City. The performers held a concert to raise money and show support for the victims of a disastrous storm last month along the northeast coast. Christopher Cruise tells about the show.

Bruce Springsteen opened the sold out show, "12-12-12: The Concert for Sandy Relief." It was fitting. Springsteen is from one of the states most damaged by Hurricane Sandy: New Jersey. Entire beach towns were destroyed by winds, waves and flooding. Governor Chris Christie is requesting thirty-seven billion dollars in emergency money from the federal government. Thousands of people lost their homes.

Among the songs Springsteen performed was "My City of Ruins." He wrote it in two thousand about a favorite beach town, Asbury Park, New Jersey.

New York City native Alicia Keys also performed. The composer and singer released an album about two weeks after Hurricane Sandy hit her hometown. She performed "Empire State of Mind II" as firefighters were honored on the stage for the final song.

We leave you with another one of the performers at the "12-12-12" concert. Here is Bon Jovi with "Livin' on A Prayer."
Related Articles
go top